Joe was eight years old. And, as most eight-year-old boys, he liked to play ball. One day, as Joe is playing in his front yard, the ball skips into the street. Little Joe runs after the ball, and suddenly a car comes to a screeching halt a few feet in front of him. The driver of the car sticks his head out the window and yells, “Stupid kid!” Joe looks at the driver, gives a little giggle, and runs back into the yard to continue playing ball.

A few minutes later, the same thing happens – a ball bounces into the street, Joe runs after it without looking, and again, a car comes to a screeching halt. The driver sticks his head out the window and yells some obscenities in Joe’s direction, and, again, Joe looks at the driver, gives a little giggle, and runs back to the yard to continue playing ball.

A few minutes later, the ball finds its way into the street for a third time. Joe runs into the street without looking, and as Joe is picking up the ball, a car comes to a screeching halt right in front of him.

This time, however, when Joe looks up at the driver, instead of giggling, his face becomes filled with terror. Joe drops the ball, turns around, and starts running. The driver gets out of the car and starts chasing Joe down the street. The driver catches Joe and then gives him a number of severe slaps on his backside.

Now, who was that third driver?

Of course this was Joe’s dad.

I think it is fair to assume that Joe’s dad was actually out for Joe’s greater good.

Tyranny versus a Greater Good

It comes out that there are two options when it comes to someone inflicting pain onto another person:

Option #2: He is out for their greater good. That is a giving act.

That is, according to Judaism, when raising a child, there is call for discipline, but even if a situation calls for anger to be shown to the child, it must be shown only on the outside. The parent should not be experiencing that anger on the inside.

As a parent, if the children “get” to you, you lose.

And the way we prevent them from getting to us was mentioned in earlier articles: If there is an Infinite Being aware and in control who does everything for the good and as a giving act, then all is for our best. Therefore, it is upon us to stay conscious of this reality and live it out in the nitty-gritty of our lives. That means that whatever seemingly negative thing my child is doing is actually for my best, and the proper response is to assess the situation and try to uncover what the next positive move is for me to make, in order to productively build from wherever it is that I am at.

This may not be easy, but it is simple. Getting angry at my child (or at anyone else for that matter) is a denial of the principles we have established so far.

Now, in terms of Option #2 (i.e., that there may be greater good that lies at the root of a person inflicting pain on another), when those other drivers didn’t pull over to discipline Joe, that wasn’t because they are nicer and more concerned with Joe’s well-being than Joe’s dad.

On the contrary, their relative passivity was out of their lack of concern for Joe and his well-being. That was an act of taking by those drivers – they cared more about getting to where they had to get to than with what might happen to Joe the next time he runs into the street.

(Of course, in our society, had those other drivers chased down and smacked Joe – someone else’s child – that wouldn’t hold, but it’s the principle of the matter that is important here. The other drivers seemingly acting nicer to Joe than Joe’s father did was actually cruelty more than it was mercy. It was an act of taking rather than of giving. Even the drivers’ yelling “Stupid kid” out the car window was most likely an act of taking, because they yelled for the purpose of making themselves feel as if they are concerning themselves with Joe’s welfare, when in fact they are attempting to pacify the side of themselves that is telling them to pull over and deal with Joe’s meandering into the street.)

Rabbi Eliyahu’s next North American lecture tour is scheduled for February 4-20. To book a presentation, seminar, or consultation email rey@getyourjewon.com 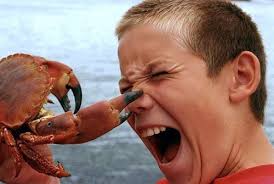 Imagine Joe was to look through a keyhole and see a masked man with a tool cutting into another person. Joe thinks to himself that a madman is having some fun with his victim, and he sees this madman as a villain. Then Joe takes a step back and notices the long white halls with […]

As parents, we’ll take our kids to get their shots even if they yell, ‘I hate you, I hate you’ because as much as that might hurt, you do it because you’re looking out for the kid’s best interests – it’s a giving act. If I was to ask a group of parents, ‘What’s the […]

You often find people who shoot their mouths off with routine questions about suffering. Off the cuff, they ask, “How can there be a God with all the suffering in the world?” and “Why do bad things happen to good people?” However, it is only upon establishing certain key principles that we can ask these […]

In the previous article, we outlined that if we want to have a close relationship with the Infinite, we are going to want to transform ourselves into givers in order to align ourselves with the Ultimate Giver, God. And, if I’m created with a nature to receive, and therefore I must receive and I should […]