In the Image of God (RJS)

Pete Enns has had an interesting series on BioLogos discussing the meaning of the phrase “Image of God” (You will find it here: Part One, Part Two, and Part Three).

From the Part One of his series: 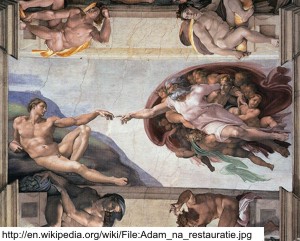 But we have to ask the question – is this a biblical approach? To reconcile evolution with Genesis some will ascribe the image of God to the “soul,” whatever this is. But Pete claims that this notion is not supported by Genesis or the rest of the Old Testament.

The phrase “image of God” is not about what makes us human. It is about
humanity’s unique role in being God’s kingly representatives in
creation.

John Walton says much the same thing in his commentary and in The Lost World of Genesis One.

Somehow it seems to me that, while true, this is not complete, not quite enough.  It doesn’t provide much help as we consider the impact of evolution on our thought about the nature of mankind created in the image of God, made alive with the breathe of life. So lets discuss the question today.

What do you see as the meaning and impact of mankind as created in “the image of God?”

The commandments against idolatry are
rooted in part at least in the idea that humans are the image of God –
there is no need for any other. In fact humans have a special place in creation as more than mere animals. Part two of Pete’s series looks at Psalm 8, a powerful Psalm.

O LORD, our Lord,
How majestic is Your name in all the earth,
Who have displayed Your splendor above the heavens!

From the mouth of infants and nursing babes You have established strength
Because of Your adversaries,
To make the enemy and the revengeful cease.

When I consider Your heavens, the work of Your fingers,
The moon and the stars, which You have ordained;
What is man that You take thought of him,
And the son of man that You care for him?

Yet You have made him a little lower than God,
And You crown him with glory and majesty!
You make him to rule over the works of Your hands;
You have put all things under his feet,
All sheep and oxen, And also the beasts of the field,
The birds of the heavens and the fish of the sea,
Whatever passes through the paths of the seas.

O LORD, our Lord,
How majestic is Your name in all the earth!

This is a profound Psalm about both the glory of God and the dignity of mankind. The humans  were created to rule as God’s representative and image. In his post on Psalm 8 Scot summarized the human task as a task “to rule on behalf of God as God’s gloried and honored Eikons.“

Humanity has dignity and has a function, a role to fulfill. We too often revel in the insignificance expressed … what is man that You take thought of him? … and too seldom consider the dignity and the function, the role, given to mankind. The creation of mankind in the image of God is tied up in an understanding of this function. But it is a function, a role we are unable to fulfill … which brings us to the gospel.

It all comes back to Jesus. Our reading of scripture must be Christ-centered and the NT has some important contributions to make to our thinking on the meaning of the term “image of God”. The third installment of Pete’s series, posted yesterday, brings the discussion around to Jesus – the first born over all creation; the image of the invisible God. Jesus fulfills the role in a way that we are not and never have been capable of. In this he also does for us what we could not do for ourselves – not so that we can rest in our insignificance and inability, but to enable us to fulfill the role for which we are created. (Col. 1 and Heb. 2 among other passages).

But there is, and must be, more to the discussion. While all of this is true, it doesn’t seem to be enough. The image of God is related to function, no question; but there must be an aspect of being that enables this function. Here we get to the impact of science in this discussion. Neither an earthworm nor a Chimpanzee is equipped to rule over God’s creation. And the incarnation is not merely God become material, but God become flesh, fully human to dwell among us. I don’t find “soul” or ensoulment a useful concept in considering the creation of mankind in the image of God or as a description of the breath of life of Genesis 2:7. The points made by Pete in his series and the identification of Jesus as the perfect image of the invisible God undermine the connection between soul and image.

So there is a corollary to the question –
the problem is not only to identify the meaning of the term image of God
but … as Scot asked in his post a couple of weeks ago … also to answer the what and how question – what is it that enables the function entailed by “image of God” and how did God make humans in his image? Scot asked the question:

How do you think about the term image of God and the creation of humans?

If you wish you may contact me at rjs4mail[at]att.net