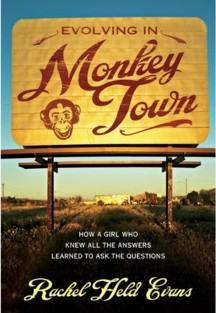 Evolving in Monkey Town: How a Girl Who Knew All the Answers Learned to Ask the Questions

The biggest complaint my students have about me is that my tests are too hard.  I use a variety of different types of questions, but the majority are either multiple-choice or essay questions.  Students have a clear preference between the two.  “Why can’t you make all the questions multiple-choice?” they often ask.  Evidently, these types of questions are easier to answer, perhaps because they think that they can better prepare for them and because they only have to choose one correct solution amongst a bunch of otherwise obviously wrong ones.  I tell them that when they graduate and start their first day at their first job they will be shocked to find out that their supervisor doesn’t give them a list of multiple-choice questions to be answered before clocking out for the day.  They chuckle… and then go back to complaining.

Evolving in Monkey Town: How a Girl Who Knew All the Answers Learned to Ask the Questions is a memoir of Rachel Held Evans and her journey to answer the essay questions of life and Christianity.  Rachel grew up in Dayton, Tennessee, known as the home of the infamous Scopes Monkey Trial featuring science (evolution) vs. religion (Christianity), with Clarence Darrow vs. William Jennings Bryan as the undercard.  This geography and history provides the setting for Rachel’s spiritual journey, which she describes as an evolution of her faith via adaptation.  Biologists like me dig the metaphor, but the reader will see that it is apt, accurate, and foundational as her story unfolds.

First off, Rachel is a great writer.  I read her book twice.  In two settings.  I would caution and encourage readers
to not take the readability of the book for granted though as there is profound
truth within these pages that demands some digesting. While I am young, I can
count on one or two hands the number of books that I feel are so important that
they need to be read multiple times throughout one’s life.  Yes, this is one of them.

Rachel’s story is one of coming out of a “having all the
answers” Evangelical Christianity into an “it’s okay to live in the questions” evangelical
Christianity.  Moving from seeing
the world as black and white to shades of gray.  Us and them to us only.  From assent to particular beliefs to a vibrant faith.  It is a great story that is shared with
wisdom, compassion, honesty, sarcasm, intelligence, and wit.

While Rachel’s journey is one of soul-searching and
questioning of her authorities, it is important to note that it is not one of
rebellion.  She was not trying to
escape or run away from the upbringing of her “horrible” and “fundamentalist”
parents and community.  The people
that surround her are presented with sincerity, humility, and kindness.  Rachel is also not out to prove anyone
wrong.  She is simply sharing her
faith story.  And in her story, the
apologetics and argument-based belief system version of Christianity that she
herself built (with the help of others, of course) couldn’t survive the cracks
of evolution, religious pluralism, homosexuality etc. that were often
illustrated to her by specific people in her life.  Ideas and statistics became people with faces and because of
her compassionate spirit Rachel couldn’t allow herself to ignore them.

Since Rachel’s prose is so great, I feel it would do her and
the book a disservice if I didn’t include a couple of snippets that I found to
be most engaging.  The first is
Rachel describing her reaction after graduating from college armed to “fight
the fight” for Christ and entering the real world, only to realize the fight
was nonexistent, or at least very different
from what she had expected (p. 203-4):

It’s always a little embarrassing
when you come out swinging and there’s nobody there to fight with you.  I think that’s how a lot of us felt
when we realized that the world wasn’t asking the questions we had learned to
answer.  Many of us who grew up in
the church or received Christian educations were under the impression that the
world was full of atheists and agnostics and that the greatest threat against
Christianity was the rise of secular humanism.  But what we found upon entering the real world was that most
of our peers were receptive to spiritual things.  Most believed in God, were open to the supernatural, and
respected ideas so long as they were not forced upon them… They weren’t
searching for historical evidence in support of the bodily resurrection of
Jesus.  They were searching for
some signs of life among his followers.

Not once after graduating from
Bryan was I asked to make a case for the scientific feasibility of miracles,
but often I was asked why Christians aren’t more like Jesus.  I have met one or two people who
rejected Christianity because they had difficulties with the deity of Christ,
but most rejected because they thought it means becoming judgmental,
narrow-minded, intolerant, and unkind.
People didn’t argue with me about the problem of evil; they argued about
why Christians aren’t doing more to alleviate human suffering, support the
poor, and oppose violence and war.
Most weren’t looking for a faith that provided all the answers; they
were looking for one in which they were free to ask questions.

The next example illustrates how much the cracks in her
belief system affected her faith in God.
Lest anyone think that the evolution of her faith journey was one of
simple adaptation, it is quite clear from her words that extinction was an
option.  Rachel, with her trademark
wit (p. 115):

Sarah looked ready to give up.  “God’s ways are higher than our ways,
Rachel.  At some point you have to
accept the fact that you cannot understand everything he does.  He is the potter.  You are the clay.  The clay can’t tell the potter what to
do.”

“You know what, Sarah?  I’m starting to wonder if maybe we made
this potter up.”

… While some friends declared my
faith dead on arrival, others insisted on defibrillation via systematic
theology.  Most insistent was my
friend Andy, who sent me an email with the subject line “just checking in”
after hearing from someone (who heard from someone else) that I’d become a
universalist, or a Buddhist, or something really terrible, like an Anglican…

And finally, Rachel coming to a tentative conclusion in her
struggle with religious pluralism, the struggle that seemed to give Rachel the
greatest pause (p. 129-30):

For as long as I can remember, the
assumption has been that the Bible speaks definitively about eternity, and that
the news is not good for people like Zarmina.  Born-again Christians go to heaven.  Everyone else goes to hell.  End of story.  Those of us who lack the fortitude to accept God’s Word on
the subject are just “Burger King Christians”.  We want to “have it our way.”

The problem for me is that such a
scheme – which renders most people damned from the start based on geographical
disadvantages – never sat well with my conscience, and my conscience is a big
part of my faith.  In fact, C.S.
Lewis argued that the basic, intuitive sense of right and wrong written on every
human heart serves as evidence for the very existence of God.  He called this phenomenon the “moral
law”, and he used it to make a case for the reasonableness of faith.  It seems to me that to ignore my
conscience is to ignore the same voice that sings when I read the words of
Jesus, that clears its throat when I’m about to do something wrong, that speaks
against cruelty and oppression, and that shouts with every sunrise and every
snowfall and every act of love, “Hey, God exists!”  Apologists like to say that following Christ shouldn’t mean
checking our brains at the door.
Perhaps it shouldn’t mean checking our hearts either.

I faced an unnecessary ultimatum –
believe the Bible or believe your conscience.  Mercifully, before I could make my choice, I came upon
another C.S. Lewis quote that changed everything.

“We do know that no person can be
saved except through Christ,” he wrote in Mere
Christianity.  “We do not know
that only those who know Him can be saved by Him.”

Evolving in Monkey Town: How a Girl Who Knew All the
Answers Learned to Ask the Questions is a wonderfully written and engaging
memoir of author Rachel Held Evans’ spiritual journey from having all the
answers to feeling comfortable pursuing the questions.  While I most highly recommend this book
to anyone who works with students and 20-somethings who are coming into their
own faith, I also recommend it to anyone struggling with doubt.  You are not alone.  And Rachel is going to narrate the
story for you.