Evolution in the Key of D: Descent and Drama (RJS)

I recently received a copy of John F. Haught‘s new book Making
Sense of Evolution: Darwin, God, and the Drama of Life.
Haught is a Senior Fellow in Science and Religion at Woodstock
Theological Center, Georgetown University and Professor of Theology
Emeritus. He testified at the Dover trial on Intelligent Design back in
2005. His book opens some interesting topics for discussion and is
certainly worth a few posts. Chapters four and five deal with a discussion of descent and drama – common descent and the drama of life.

One of the rather definite conclusions of evolutionary theory is that mankind is part and parcel of the animal kingdom. There is, or appears to be, no foundational difference between humans and chimpanzees (see this story for and interesting example). According to Haught:

If human beings have descended in a continuous way from the simplest forms of life, and if we share so much of our genetic makeup with chimps (as much as 96 percent) and even bacteria, what can be the biblical stories of Adam and Eve’s special creation possibly mean? In what way, if at all, are human beings special? (44)

The integration of science, including evolutionary biology, will consider and grapple with the dignity of human life and the drama of the universe.

Is the dignity of human life a problem as you consider the possibility of evolutionary creation?

In his chapter on Descent Haught suggests that the difference is not found in
reductionist biology but in something else – perhaps  the information
content. It is not that information demands design – but that
information is a concept that goes beyond simple reductionism.

The spirit of reductionism may still be
alive, but the consensus is growing that comprehensive wholes such as
living organisms cannot be reduced to their elemental constituents
without losing something significant in the translation.

In the case of living beings, one dimension
that gets lost in simpleminded reductionism is the dimension of
“information.” Information means that more is going on in life and
evolution than merely molecular and atomic activity.  … Information is
not reducible to matter and energy but it is no less natural. (pp.
49-50).

We are more than
chemicals and reactions, there is a future toward which we move. The future has goodness, beauty, and  purpose. Haught sums it up like this:

Without diminishing or denying the results of scientific research, a theology of evolution locates the whole drama of life within a vision of the universe still open to becoming more deeply infused with being, goodness, and beauty as it is drawn toward its Absolute Future. Within this biblical setting our special human status and value, as well as the meaning of what it is to have a soul, must have something to do with our capacity to be grasped, renewed, and dignified by the inexhaustible Future we call by the name of God. (p. 52)

There are some interesting ideas here, playing into the concepts of mission and purpose. It is also consistent with the fact that the creation story in Genesis story did not depict a static perfection – it is (even with out the Fall) the beginning of a process of becoming. It was good – not done. On the other hand – the idea of God as Future is disturbing. It is, or appears to be a deist, not a personal theistic view of God. Haught defers to the last chapter of the book to explain the concept and I am interested to see how he develops it there. 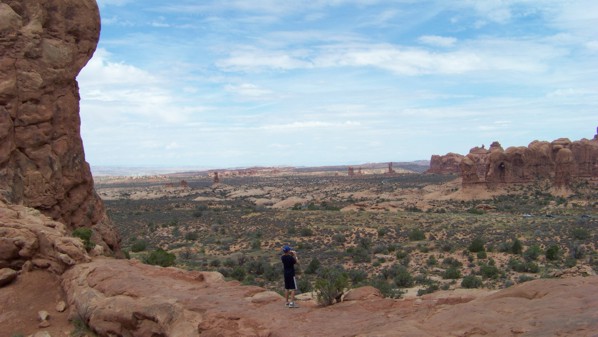 This leads to the next chapter: Drama.  According to Haught a Christian theology of evolution connects with the transformative drama of life, with the whole of creation growing into the abode of God.

Theologically speaking, the central point of interest is whether the Darwinian drama should be read as tragedy or comedy. Do all the countless moments of the life-story add up to absurdity and nothingness in the end? Or is there a direction to the story, possibly even a redemptive climax yet to come, an outcome that might give a lasting meaning to it all? (p.54)

For Haught the chemical and physical processes of life differ from the inanimate processes through the capacity for expectation, the striving to overcome, to survive, to thrive. A purely material view of evolution bleeds the drama out of it – leaving contingency, accident, and meaningless rambling.

A finished creation whether arising from a young earth view, or an old earth progressive creation, also removes the drama of life from the picture – there is no expectation, purpose or climax.

The flawlessly engineered world they prefer would be dead on delivery. Since it would already be perfect, it would also be finished; and if finished, it would have no future.

In other words there  could be no dramatic transformation going on in the kind of universe they idealize. Determined by a hypothetical intelligent designer to correspond impeccably in every detail to an eternally fixed master plan, such a world would be devoid of contingency, indeterminacy, freedom, and futurity that give a truly dramatic character – and possibly meaning – to evolution and the larger world process. (p. 63-64).

Pulling things together a bit, the drama of life, of creation, has a purpose, a goal, a Destination. But one thing that an
evolutionary understanding of creation requires is a recasting of
theology in terms of this process of becoming. The vision of drama, of potential, of growth is part of the Biblical narrative from the beginning. Genesis, Exodus, the Conquest, the Kings, the Prophets, the Exile, the Incarnation, the Resurrection, the Future. In a more traditional reading of our story there is perfect creation destroyed by the Fall and an ascent to perfection once more (not on our doing – but as God’s plan). The idea of evolutionary creation isn’t counter to the drama of the biblical narrative, it is
the precursor and an integral part of the overall becoming of creation. But it does influence or change how we think about the nature and purpose of creation. It also changes, gives a twist or context, to how we think of mankind as special, created in the image of God and of the nature and consequence of the Fall.

What do you think – is this drama of life, this mission, this process of becoming a key piece of Christian theology?

If you wish to contact me you may do so at rjs4mail[at]att.net.

Are Christians Really....? 1
archives most recent
More from Beliefnet and our partners
previous posts