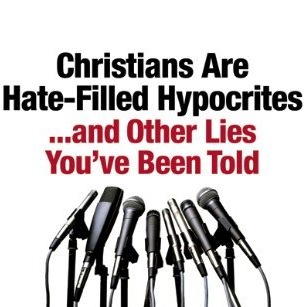 As I mentioned Monday afternoon, I’ve got a new book sitting here that will be a dynamic book to read and blog about. It’s one of the most encouraging and myth-busting books of the last two decades. The book is by Bradley R.E. Wright, and he’s a professor at the University of Connecticut where he teaches sociology.

Wright’s book is called: Christians Are Hate-Filled Hypocrites…and Other Lies You’ve Been Told: A Sociologist Shatters Myths From the Secular and Christian Media

.
Here’s a big insight from Wright, and it speaks to me about something I know I’ve made a mistake or two about: when you talk about real trends in the Church, make sure your facts are accurate. It is too easy to repeat rumors and apocalyptic warnings, like “the youth are vacating the church so fast if we don’t do something today we may not even have a church tomorrow.”
What is one observation about the Christian church that was being made routinely that has been proven wrong? What is something you hear often that needs to be examined? (Like Christian Smith’s recent book that showed that while 20somethings are the least likely to attend church, their numbers are no different, and perhaps slightly better, than previous generations. So, the apocalyptic warning is not so accurate.)
Wright’s book is about erroneous claims made on the basis of bad or insufficient data. So, in chp one he examines why we hear so much bad news about Christianity. Is the media biased? (How do you answer that question? Got some evidence? Does the evidence square with what the media do?)

Not long ago, as a result of a Barna claim, it was said that in the public’s opinion the only thing worse than being an evangelical was being a prostitute. He chases this down to show that the numbers are probably otherwise (there’s a major glitch here in that so many responded “don’t know” and that might mean they don’t know what an “evangelical” is and this skews the data etc). Anyway, Brad Wright’s using this as an illustration and the illustration needs to stick: be careful with what we claim. That stat was used and circulated it just got worse and worse.

Where do we get our stats? Wright uses the major empirical studies and he’s a professional sociologist and he uses numbers rigorously and his work is checked by peers. Not all numbers meet such levels of scrutiny. Some of us use stats because they help our case.
Newsworthy stuff is stuff that is out of the norm, so negative stuff about the church will show up in the newspaper. We keep repeating them and things get worse and we actually hurt the church by repeating some of this bad information.
His work is comparative: Christians are compared to others. Some measure Christians against perfection; others against their own standard. So, Wright’s stuff will be useful to say things that comparative.
Next post: Is American Christianity on the brink of extinction?
read next post