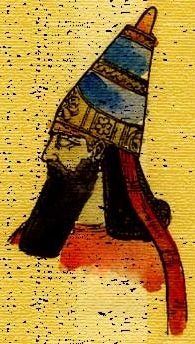 Psalm 2 [after jump], according to John Goldingay, would also be at home in one of the prophets (Psalms, Vol. 1: Psalms 1-41 (Baker Commentary on the Old Testament Wisdom and Psalms)

). But it’s now part of the double-psalm introduction to the Psalms. If Psalm 1 ends with the wicked’s path perishing, Psalm 2 [see bracket] ends with the nations perishing with regard to the path. Psalm 1 begins with blessing, Psalm 2 ends with blessing.
God’s people will be blessed; God’s king will rule. The wicked will perish; the wicked will not rule; God’s king will.
Such a promise sweeps up the promise to both Abraham in Gen 12 and David in 2 Sam 7. But the psalm’s parameters are so great and wide one has to take it as idealism or as eschatological hope.
The pagan nations want to conquer and control Israel’s God and Israel’s people but, in spite of their wishes, God rules and he sees after Israel and its king.
A potent question is asked in vv. 1-3: Why? It’s a statement of confidence. That is, they are wasting their time because YHWH looks after Israel and its king. The entire world is implicated in these verses. They are all after YHWH and Israel and Israel’s king.
God in this psalm is watching and laughing at the hybris of the nations. Goldingay says this is not a description of distance but of involvement. His observation of the hybris leads to God’s wrath. God says the king, the king God has installed, is on the throne. Their hybris is opposition to God. My king is on my hill!

Why are the countries devising plots that will fail?

2:2 The kings of the earth form a united front;

against the Lord and his anointed king.

Let’s free ourselves from their ropes!”

2:4 The one enthroned in heaven laughs in disgust;

the Lord taunts them.

2:5 Then he angrily speaks to them

and terrifies them in his rage, saying,

2:6 “I myself have installed my king

‘You are my son! This very day I have become your father!

and I will give you the nations as your inheritance,

the ends of the earth as your personal property.

2:9 You will break them with an iron scepter;

you rulers of the earth, submit to correction!

Otherwise he will be angry,

and you will die because of your behavior [path],

when his anger quickly ignites.

How blessed are all who take shelter in him!

read next post
What do you think about heaven?
archives most recent
More from Beliefnet and our partners
previous posts