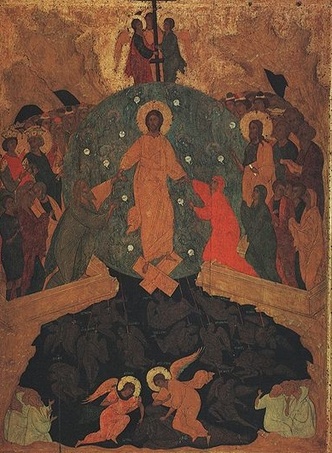 Dante took theology about the afterlife and turned it into an epic adventure, modeling his story on Homer’s stories and on Virgil’s famous The Aeneid and in many ways taking them to the next millennia of history.

In the East, instead of finding a Dante’s journey into the underworld and then back up to heaven, we find poets who told stories of Christ’s victory of Death and the Devil and Hell. The principle poets are Ephrem the Syrian and Romanos the Melodist. Their poetry, which has been said to be some of the best in the world, puts into words the theology of what Christ accomplished between his death and his resurrection/ascension.
Do you believe in the descent into hades (after the death of Jesus)? Why or why not? What part does this theology of the fathers play in your understanding of the descent?
This Lent I’m reading the pious and and learned study of Archbishop Hilarion Alfeyev (Christ the Conqueror of Hell: The Descent into Hades from an Orthodox Perspective

), who tells the story of how we get from the Bible to the current liturgical ideas in Eastern Orthodoxy. As I dipped into these poems by reading Alfayev, what struck me was how personified and mythic and epic everything had become. Here are the principle themes:

Christ, the protagonist, breaks the gates and bars of Hades, overpowers Satan and his ministers, and breaks their resistance. Christ then illumines Sheol with is light, destroys Death and opens the way for the dead to rise. What we see in the poetry of the East is a near universal, if not universal, victory over death and hades and hell and Satan. Which borders on a kind of universalism.

Alfayev sums up his study by noting four views of the effect of Christ’s descent:
1. All are liberated from hell and death (Orthodox liturgical emphasis).
2. The OT saints are liberated (Eastern patristic tradition emphasis; West after Augustine).
3. Those who followed Christ [elect] were liberated (Augustine).
4. Those who lived by faith and in piety were liberated (West; after Augustine).
Alfayev sees Scripture as prominent in authority with the liturgical texts second. The councils, which are specific responses to specific issues at specific times, are alongside the liturgical texts. Then the fathers opinions.
Thus, the descent for Alfayev is doctrine but how many find salvation is private opinion. The most pervasive view, as I read him, is that only those who believe are saved.