Signature in the Cell 1 (RJS) 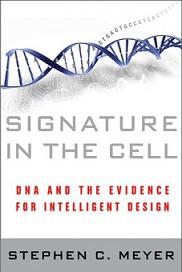 Stephen C. Meyer has published a (very long, but readable) book, Signature in the Cell: DNA and the Evidence for Intelligent Design, outlining his argument in favor of intelligent design. This book essentially argues that life is very complex, the origin of life is a puzzle, and the information content in DNA cannot be explained by natural means.  Meyer contends that the evidence supports an idealist not a materialist view of the universe, and more importantly, of life; where idealist means that there is an idea, a mind, behind the observed reality while materialist means that all can be explained without reference to a mind.

All Christians believe that the universe, and life, were created intelligently and for a purpose. This is not the issue. The real question here is whether God’s methods in creation can be explained through natural means or whether there is scientific evidence that demonstrates that a designer was involved. This is a question of interest to many – and I am going to focus several (3 or 4 or so) posts on this book.

In this series of posts we will look at Meyer’s argument and
evidence and try to address one simple question:

Does Meyer make a sound scientific case for intelligent design? Does his argument make sense?

This series will continue – one post a week for several weeks. If you are interested, get the book and join the conversation. (You may also find Darrel Falk’s review interesting – it is located on the BioLogos blog Science and the Sacred – and his follow-up post as well.)

In Ch. 20 Why it Matters (p. 439-440) Meyer relates an
incident, repeating a common pattern, when in 2005 he appeared on an
MSNBC program called The Abrams Report.

But
Abrams was setting a trap, one that, by this time, I knew all too well.
If I answered truthfully (which I did) and told him that neither the
evidence from biology nor the theory of intelligent design could prove
the identity of the designer, he would accuse me of dishonesty … If
on the other hand, I told him – again truthfully – that I thought that
God had designed the universe and life, he would seize upon my words as
proof that the theory of intelligent design was “religion,” thus establishing in his mind that it must lack any scientific basis.

This
incident – and many more like it – demonstrate an important problem.
Most discussions of intelligent design in other forums are derailed from the start by
the underlying culture war at work in our society. The conversation
quickly degenerates to name calling and guilt by association. We have
Darwinists and evolutionists and creationists – uneducated ignoramuses
defending superstition and conniving dishonest scientists fabricating
evidence. I approach this series of posts with some trepidation – as I
want no part of such a discussion.

Meyer continues as he relates his experience …

…But I was on Mr. Abram’s show to to
discuss the theory of intelligent design, and the theory does not make
claims about a deity, nor can it. It makes a more modest claim, based
upon our uniform experience about the kind of cause – namely, an
intelligent cause – that was responsible for the origin of biological
form and information.

… Clearly, his question was legitimate. But I wanted to answer it after I had explained what the theory of intelligent design is and after I had established that there is scientific evidence for it.

OK – let’s take Meyer at his word. In this book Meyer explains what he means by the theory of
intelligent design and outlines his argument for an intelligent
designer. We will look at his argument.

First the ground rules – as always on this site:

Any
comment
that resorts to name calling, ridicule, or guilt by association will be
unceremoniously deleted. In particular, in this series consider the
words evolutionist, Darwinist, and creationist off limits – find
another way to make your point.

Any
comment
that attacks persons, whether Meyer, other supporters of ID, opponents
of ID, or other commenters, rather than ideas will be deleted.

View
this as a conversation among friends over coffee – we wish to convince, explain, and
consider, not score points.

I am explicit here because, as noted above, far too many posts elsewhere on this subject in general and this book in particular degenerate rapidly – this sheds no light and helps no one.

To elaborate here we need to look at how Meyer defines intelligent design and the argument he finds persuasive. Perhaps the concluding paragraph of Chapter 20 provides the best summary.

But to detect the presence of mind, to detect the activity of intelligence in the echo of its effects, requires a mode of reasoning – indeed a form of knowledge – that science, or at least official biology, has long excluded. If living things – things we manifestly did not design ourselves – bear the hallmarks of design, if they exhibit a signature that would lead us to recognize intellectual activity in any other realm of existence, then perhaps it is time to rehabilitate this lost way of knowing and to rekindle our wonder in the intelligibility and design of nature that inspired the scientific revolution. (p. 452)

He makes essentially the same argument in other places as well – if it looks like design, the most reasonable conclusion is design. The inference to best explanation leads to intelligent design. Just a paragraph earlier he summarizes what he finds to be a persuasive argument for design:

For one hundred and fifty years many scientists have insisted that “chance and necessity” – happenstance and law – jointly suffice to explain the origin of life on earth. We now find however, that orthodox evolutionary thinking – with its reliance upon these twin pillars of material thought – has failed to explain the origin of the central feature of all living things: information. (p. 451)

Meyer’s proposal is that the information content of the cell – the DNA – and the origin of life  based on this information cannot be explained by scientific reason, natural mechanism, that omits the mind of the maker.

I have read much of the book already and will read all of it as I continue this series. His argument does not convince me.  But this leaves me with an obligation to explain why, and I will attempt to do so in future posts, at least in part. Feel free to disagree and offer reasons why.

Do you think that recognition of a mind active in creation is necessary to understand the scientific underpinnings of life or the origin of life? Is this the only alternative to chance and happenstance?

It seems to me that there is a middle ground between the insistence that chance, happenstance, and law (the laws of physics) suffice to explain all and the suggestion that biology – life – can only be explained with reference to a creative mind. Alister McGrath (A Fine-Tuned Universe) and Simon Conway Morris (Life’s Solution) provide some insight into this middle ground. The fabric of the Universe makes life possible and inevitable – not a highly contingent accident. Thinking scientifically we look for the causally connected series of events that resulted in the present reality – as part of God’s method in creation.

On the other hand, science can explain, but not “understand” life. This is where another way of knowing comes into the picture. Human consciousness and purpose may be explained without reference to a creator, but they can only be “understood” with reference to the creator. But this does not impact the science of biology or the study of origins.

Responses and suggestions? What do you think?