Peter Rollins and His Relentless Paradoxes 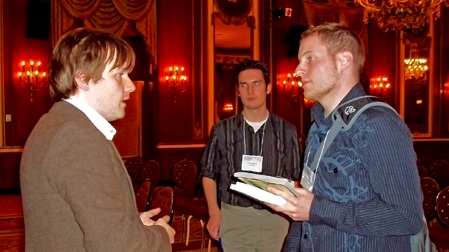 I will admit that I found Peter Rollins’ The Fidelity of Betrayal over the edge, but I did really like parts of his How (Not) to Speak of God. He loves paradoxes and he explores them and he creates them and he offends by them, and sometimes I wonder where he stands and what he’s really doing. And his rhetoric and his ideas draw me back to listen again…

And his newest book, The Orthodox Heretic: And Other Impossible Tales

, is my favorite. Yes, indeed, another paradox though not a new one — others have used this one. I don’t know how to put those two substantives together, but this book is 33 stories — his own parables. I’ve long been impressed by the power of story, not as an “illustration” of an idea but as a way of coaxing readers and listeners into an imagined world. By entering into that imagined world one finds new light and senses a new way of life, and that is exactly what Peter does in this book.
It is unfair to you to list the title of all 33 parables; it is unfair to Peter to describe them, but let me just do one. In chp 5 he tells the parable of salvation for a demon and he spins a wonderful yarn of an old priest who was radically hospitable, and so hospitable that folks stole from him — well, they couldn’t because he had given all things to God. Then a demon enters into the church and finds the old man at worship and prayer and the demon tears the place up, and then invites himself to dinner with the old man as he leaves and the old man says he can come to his home. Then the demon tears up the old man’s place, and then asks if he can make his home in the old man’s heart — and the old man says of course — and it defeated the demon and he ran away on empty. Quite the story … and you’ll have to read Peter’s own comments on his own story. Anyway, that’s a taste.
I’m sure of this: Pastors would benefit from this collection of stories, even if he spins some yarns they don’t like.
read next post