Education for Human Flourishing … Do we need the soul? (RJS) 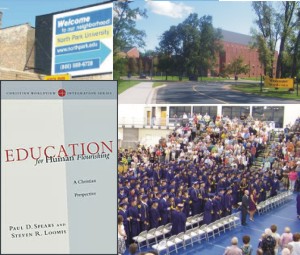 IVP is publishing a series of books designed to help college students in a
variety of disciplines integrate a Christian worldview into their approach to their discipline.

The first book in this series is by Paul Spears and Steven Loomis entitled Education for Human Flourishing: A Christian Perspective. This book addresses the question of the integration of a Christian worldview with education and the philosophy of education. The book is directed toward K-12 teaching in particular, but can also apply to higher education.

As a professor, an educator, and a scientist I was interested in this book. There is much in the book that is very good – good insights worth discussion. On the other hand this book fails in the goal of integration. It will not help Christian teachers or scholars move from
compartmentalization to integration. This is a book mired in the culture war outlook of the evangelical ghetto. It is rooted in the evangelical subculture, speaks only to that culture, and takes an adversarial approach. Not only does it take an adversarial approach with respect to secular humanism or scientific naturalism – it is dismissive of fellow Christians, even evangelical Christians, who take views with which Spears and Loomis disagree.

This brings up some questions I think we need to consider in depth.

What does it mean to integrate a Christian worldview into all aspects of life – and especially into academic disciplines and professions?

How should we think through our views – and teach them?

Should we emphasize a mere Christianity or should we divide along party lines?

I was rather abrupt and blunt above. Let me give an example of what I mean using the opening chapter of the book.

Spears and Loomis propose that a Christian view of education and the profession of teaching designed for human flourishing must start with a proper understanding of the nature of humanity. This is an excellent starting point – and I agree completely. The first chapter of the book – entitled Humanity Revisited –  presents their view.

What do Spears and Loomis say?

Things
such as consciousness, the immortality of souls, freedom of the will, and God are real entities that cannot be investigated empirically. Dualism is an important metaphysical concept that undergirds our anthropological investigations.

We believe that dualism, and specifically substance dualism, is the most effective way by which we can best explain the fundamental issues in human ontology. (p. 44)

This is a valid view – and one held by many Christians. But where do they go with it?

What stems the tide of the scientific onslaught is Christianity’s commitment to a super natural reality, which stands outside of the physical realm. Christianity and a understanding of dualism, which is rooted in both theological and philosophical principles, will enable us to develop a holistic understanding of human persons. (p. 44)

Holding to dualism to “stem the tide” strikes me as the wrong approach from the beginning. Shouldn’t we consider the options and the nuance in putting forth a Christian view of persons? But Spears and Loomis draw a sharp dichotomy.

This view of substance dualism is at odds with popularized notions of contemporary science. Broadly, views of about human ontology comes in two major forms: physicalism and dualism. Basically physicalism holds that humans are nothing more than material substances that can be examined through the senses. (p. 46)

They go on to construct a caricature of the general views.

Subjective first-person experiences have no place in the physicalist world. So when a physicalist talks about “Bob,” he or she will talk about things like Bob’s weight, his height or his shoe size, but will be unable to talk about anything that has to do with Bob’s subjective internal states as material phenomena, which is insufficient. (p. 47)

Later on the same page they allow no nuance and give this patently absurd example to explain why physicalism is insufficient:

Additionally, physicalism cannot explain why personal identity endures through physical change. … To illustrate, imagine that someone you know (lets call him John) is in a tragic automobile accident, is badly burned and loses a limb. … the person we are visiting in the hospital still identifies himself as John, and he gives historical accounts of himself that are consistent with what we know about our friend John. Physicalism can give no adequate account of why we know our friend who has been disfigured is still John.  … So we can see how physicalism fails to holistically articulate the fundamental properties that make up our anthropology. (p. 47)

It gets worse – they mention two kinds of dualism, property dualism and substance dualism, but…

Property dualism falls under many of the same criticisms as physicalism and therefore will not be discussed at length in this section. (p. 48)

Only their view is worth serious consideration … and what about other Christian thinkers who wrestle with a view of persons?

In theological circles it has recently become vogue to attack the notion of dualism. Some reject the notion of dualism because they believe that it is not a biblical notion but a Greek idea smuggled into Christian theology. Nancey Murphy, a philosopher from Fuller Theological Seminary, writes that humans are “at our best complex physical organisms; … we are Spirited bodies.” Given recent attacks inside of Christian philosophy and theology, it is even more important to turn to the Scripture to gain and understanding of our anthropology. (p. 50)

Spears and Loomis don’t deal with Murphy’s view – they put it down with phrases like “it has become vogue” and “attacks inside”  and then proof text their way to their view in six rather short pages.

They are similarly abrupt and adversarial as they move through many other topics in education and the philosophy of education; labeling and dismissive.

Why do I bring this up?

I agree with Spears and Loomis that an understanding of the nature
of humanity is essential as Christian intellectuals in education
integrate their faith with their academic and professional thinking. I am not really arguing with their view here – but with the way they present their view and the way they deal with the options and with opposing views. I am undecided on the issue of substance dualism, some other form of dualism, or a Christian materialism such as that discussed in Kevin Corcoran’s book (we just blogged through this here). I don’t think substance dualism is the best option, but it is certainly
an option.  A view of ontological naturalism is not consistent a Christian worldview. But there are many nuanced Christian possibilities consistent with Scripture and our understanding of theology. Both alternative Christian views and non-Christian views must be dealt with honestly and fairly. Spears and Loomis fail on both counts.

I’ll be blunt – the approach used by Spears and Loomis here is a common and apparently accepted approach in evangelical scholarship. As long as this is an accepted approach to dealing with the intellectual questions raised in academia – evangelical thinking will not be taken seriously outside of the fold. More than this – as thinking Christians advance within their fields they will find it hard to (1) take evangelical scholarship seriously and (2) integrate faith with their intellectual and professional life. This is part of the scandal of the evangelical mind (to use Mark Noll’s phrase).

Enough of my opinion – what do you think? I’ve been abnormally blunt – lets start a conversation. If you disagree with me, or think I’ve been too harsh, explain why. Push back.

Do you think that the approach taken by Spears and Loomis is reasonable or right? If so why? If not how do you think we should tackle such problems?

And back to my initial question…

What does it mean to integrate a Christian worldview into all
aspects of life – and especially into academic disciplines and
professions?  How should we go about developing our mode of thinking and expressing Christian views?