We begin today a new series about the new perspective, and we will be discussing Tom Wright’s new book , a book that responds to John Piper’s criticism of Wright and the New Perspective (Justification: God’s Plan & Paul’s Vision

). Today I want to begin with two preliminary comments, and I’m open to corrections if my sketch below is not entirely accurate.

First, there is no such thing as the new perspective if one think it refers to some body of doctrine. The New Perspective, therefore, deserves a brief sketch as to how it arose and what it means. It begins with Krister Stendahl’s famous chapter in his book Paul Among Jews and Gentile

. This was back in 1976 and Stendahl argued that the post-Reformation doctrine of justification was rooted, not so much in 1st Century Judaism or the apostle Paul, but the “introspective conscience of the West.”

Many folks thought Stendahl’s major point was brilliant; the essay was formative. But it was EP Sanders who took the substance of Stendahl and established it on the basis of evidence from Judaism.

So, in 1979 1977 EP Sanders wrote Paul and Palestinian Judaism: A Comparison of Patterns of Religion

. Like it or not, this is the most influential book of the second half of the 20th Century when it comes (1) to our understanding of Judaism and (2) how to understand Christianity’s relationship to Judaism in light of #1. This book simply must be read by all seminary students. Sanders argued that Luther imposed his complaints with Roman Catholicism upon Paul’s complaints with Judaism. Sanders argued that Luther got it wrong and that Judaism was not a works-righteousness religion. It was instead a religion of what he called “covenantal nomism.” The covenant got you into relationship with God and the law was given to maintain that relationship. Therefore, much of our reading of Paul since the Reformation has been wrong.

Not long after this, in 1982 to be exact, Jimmy Dunn began to use the expression “the new perspective” as he tried to express his enthusiasm for the fresh discoveries that were occurring in Pauline studies. (The “new perspective” was used first by Tom Wright in a lecture in 1978.) This piece can be found in a collection of Dunn’s studies on Paul and the law (Jesus, Paul and the Law

and now see The New Perspective on Paul

). Then Jimmy went on to write his two-volume commentary on Romans (Romans

). There is some development in his own thinking about the implications of Sanders’ conclusions but Dunn made a strong case for a more sociological perception of Paul’s mission, gospel, and understanding of Judaism-justification. In other words, Paul was against the boundary-marking characteristic of Judaism that kept Gentiles out, and that Paul’s mission was to get Gentiles into the one covenant God had made with Israel. 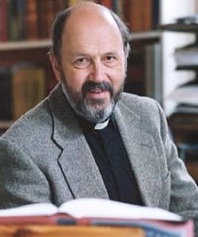 Then along came, and only then did along he come, N.T. Wright. Wright built upon Sanders and Dunn, to be sure, but he paved his own ground — building in important ways upon CH Dodd and GB Caird — by pursuing the “end of exile” themes in his early Pauline studies and then his Jesus studies, and then returned to Paul when the New Perspective had taken hold — and he added to it, supplemented it, and has taken much of the heat by the critics. Wright has refashioned justification less in terms of personal conversion and more in terms of “who is in the people of God.” And he has now added to all of this a new dimension, an anti-imperial reading of Paul and earliest Christianity — and that had little to do with either Sanders or Dunn.

But at the bottom of these folks is a belief that Christians have misunderstood Judaism as a works religion and at stake is a profound (changed) orientation to the human problem in much of Reformed and Lutheran thinking: namely, that humans want to earn their place before God, that their fundamental problem is the attempt to establish themselves before God. The New Perspective, in one way or another, does not see this as the problem Paul himself faced and therefore to read Paul in light of this problem misreads Paul in important ways. I call this traditional reading the Augustinian approach to Paul, and I wish more of the critics of the New Perspective would give this Augustinian basis, which most of them think is actually Pauline, more attention. The New Perspective says, “well, yes, perhaps” but that is not what Paul was going on about when he was engaged with his opponents. The issue was not anthropological but both salvation-historical (more Sanders) and ecclesial (both Dunn and Wright). That’s how I see things.

The issue then is how to read Paul in his historical context. This is the Protestant approach and many of us think that far too many of the critics of the New Perspective, instead of re-examining the Bible in its historical context, have appealed instead to the Tradition as established by Luther and Calvin. This leads me to another point…

Second, until someone has read Sanders, Dunn, and Wright, and then examined both the Jewish evidence and the New Testament evidence afresh, one should be
very careful about criticizing the new perspective ideas. If one does not do these things, one is not being Protestant. Right or wrong, the New Perspective is the most Protestant move made in the 20th Century — and by that I only mean that it seeks to get back to the Bible and challenge our beliefs in light of what we find in that Bible.

I have heard
plenty of folks say “the new perspective is wrong” and even one person
saying “anyone who believes in the new perspective is not Christian.” I
have heard these things far more often from those who have not even read EP Sanders’ famous book, Paul and Palestinian Judaism,
do not know that Jimmy Dunn
“invented” the expression [added: as a label for] “the new perspective on Paul” for a lecture
he gave at the Manson Memorial Lecture, think Wright is the New Perspective, and do not know that Sanders, Dunn and Wright
differ in some significant ways. I hear that the New Perspective — as it is a fixed body of belief — often from folks who have no idea what the Jewish texts say about faith and works and covenant and justification.

Perhaps this is a third point: to extrapolate from the exegesis in historical context of Stendahl, Sanders, Dunn, or Wright to “what they must believe theologically” is dangerous business and more often than not simply unfair. In other words, to say they have denied the Reformation etc requires that they say that very thing. Often I hear critics “extrapolating” to what these New Perspective folks must believe and then engaging with this “reconstructed theology” to show that that reconstructed theology is not consistent with the Reformation. Hold on I often say. Let’s see what these folks have to say about these things. One example: Tom Wright is not alone in saying that it is more than a little difficult to prove that Paul believed in double imputation. That does not mean that Tom Wright thinks we stand before God on our own righteousness. It only means that, in his view, the Reformers’ doctrine of double imputation is a development of Paul and not something Paul actually states explicitly. That’s an example.

read next post
Changing Locations: by PW
archives most recent
More from Beliefnet and our partners
previous posts