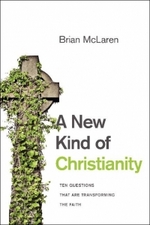 What’s wrong with the old kind of Christianity?

Recently, I interviewed Brian McLaren about his new book, A New Kind of Christianity: Ten Questions That Are Transforming The Faith.  McLaren is author of over a dozen books and among Time magazine “25 Most influential Evangelicals” (2005).  The interview covers a number of pertinent subjects for faith in the 21st century, for the next week here at Jazz Theologian we’ll consider one item each day.

McLaren:  Several
people have said that NKoCy summarizes my work to date and extends it into new
territory, and I think there’s a lot of truth to that, although it is less

directly engaged with contemporary crises than Everything Must Change, or with
spiritual formation than Finding Our Way Again. Instead of saying what’s wrong
with the old kind of Christianity, I’d simply say that as the Christian faith
matures over the centuries, we are ready for new challenges, new learnings, and
it would be a shame to fail to keep maturing. So older kinds of Christianity
were appropriate to their times and our maturity, but we need to keep growing,
learning, and maturing.

Join the Groove…do you think we need a new kind of Christianity?

(This interview also appears at UrbanFaith.com)

read next post
Transition to Beliefnet.com
archives most recent
More from Beliefnet and our partners
previous posts

Thank you for visiting The Jazz Theologian page. This blog is no longer being updated. Please enjoy the archives. Here are some other blogs you may also enjoy: Red Letters with Tom Davis Recent prayer post on Prayables Most Recent Inspiration blog post Happy Reading!

November is National Adoption Month.  God is up to something.  The Bride of Christ is waking up all across this nation to the need to care for orphans through adoption and foster care. James 1.27 makes it clear that to be Christian is to care for orphans, “Religion that god our Father accepts as pure […]

Sermon of the Week: Your Lot in Life (P6)

This book just keeps getting better!

A Ghost? Or Our God?   By Patricia Raybon It’s dark, cold and early. But I’m excited. On this morning, the most important thing I have to do is hear from God. And not just a little bit. I want to hear without limits. Isn’t that what we’re all saying today? That we want to be […]