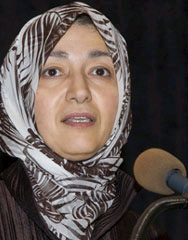 Several sessions at the 49th annual convention of the Islamic Society of North America centered on one topic: how to answer difficult but frequently asked questions about Islam.

Maha ElGenaidi (pictured) moderated a discussion with Ameena Jandali and Jamal Badawi on the subject Sunday [2 September 2012]. Ms. ElGenaidi is President and CEO of Islamic Networks Group (ING), based in the San Francisco Bay Area. Ms. Jandali is a founding member, trainer, speaker and Content Director of ING. Dr. Badawi, a former professor, is an Egyptian-born Muslim Canadian.

Ms. ElGenaidi asked for sample questions from the audience, and was peppered with commentary about the role of women, from the wearing of the hijab to questions of polygamy to punishments for adultery.

Answers from the two panelists did not, in this writer’s opinion, give much help to the questioners. Saying that the hijab is worn for modesty does not explain how a piece of cloth covering the hair of a woman achieves that goal, for example.

Nor does commenting that the Qu’ran dates from the 7th Century explain why a man is allowed four wives or why it takes testimony from two women to equal the testimony of a man.

It is this writer’s opinion that a more detailed approach to this topic needs to be made. Referring questioners to parallel Biblical texts (to explain the abhorrence of homosexuality, for example) has no meaning for the more than 50% of Americans who are not members of any religious institution.

It also can be noted that the women attending this conference, the vast majority of whom can be assumed to be Muslim, evidenced a wide variety of dress. There was no consensus at the ISNA convention on the necessity of hijab for an American Muslim woman.

Perhaps 2/3 had some sort of head covering ranging from a length of fabric carelessly draped over flowing curls to a tightly pinned scarf showing not one strand of hair, and maybe a dozen wore niqab (or face mask).

As one woman remarked to this writer, if the object is to show modesty, then wearing hijab in a Muslim-minority country is an immodest display, especially when the scarves are brightly colored, sprinkled with glitter and sequins or adorned with jewels, fabric flourishes and lace.

No doubt, the discussion will continue.