Of Anniversaries and Triumphs

Once again, I have the pleasure of being in Israel, landing today at Ben Gurion Airport in Tel Aviv. This week is the 50th anniversary of the capture of the Old City of Jerusalem by the Israel Defense Forces, during the astonishing Six Day War.

But there is another, essentially obscure anniversary I am also celebrating with gusto. Especially here in the Jewish homeland (I have seen many happy Israelis today, thriving in an historic success story).

Seventy five years ago today, the Nazi beast Reinhard Heydrich was killed in an ambush by a Czech-Slovak team, trained by the British.

Bravo to all who exterminated this fiend. Heydrich and his SS were responsible for scores of murders of women and children. The Nazi reprisals for Heydrich’s trip to hell were vicious, but at least he was gone from the earth. He lived for one week after a grenade ripped through his body.

I celebrate this week the noble spirit of the Jewish people, who today live the best revenge.

Seventy five years ago today, a man who thought he would exterminate all Jews joined Pharaoh in the pit. 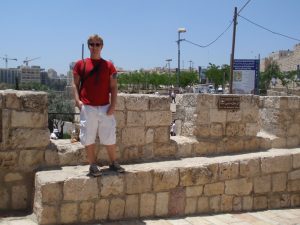