The Time of the End

In the Bible’s book of Daniel, a fascinating bit of information is conveyed. Daniel was a Hebrew prophet at the time of the Babylonian exile, in the sixth century B.C. His book is heavily prophetic, and for generations scholars and students have disagreed over key points, such as whom Daniel was writing for in the future.

Among the future events Daniel predicted: the rise of Alexander the Great, a few hundreds years in the future, and discussion of the antichrist at the time of the very end of human history.

In Chapter 12, we also read the following:

And at that time shall Michael stand up, the great prince which standeth for the children of thy people: and there shall be a time of trouble, such as never was since there was a nation even to that same time: and at that time thy people shall be delivered, every one that shall be found written in the book.

And many of them that sleep in the dust of the earth shall awake, some to everlasting life, and some to shame and everlasting contempt.

And they that be wise shall shine as the brightness of the firmament; and they that turn many to righteousness as the stars for ever and ever.

But thou, O Daniel, shut up the words, and seal the book, even to the time of the end: many shall run to and fro, and knowledge shall be increased.

Some point to the period beginning in the second century B.C., the time in which the famed Maccabees would overthrow foreign rule and establish Jewish sovereignty for a couple generations (before the Romans would once again put down Jewish “rebellions”). One intriguing piece of evidence is that God told Daniel to write all this down and “seal it” in a book, to be opened at a select time in the future. 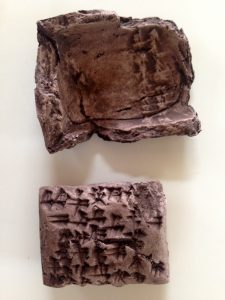 Today, archaeology provides us with wonderful practical examples of what might have been meant by sealing the book. In ancient Mesopotamia, the “cradle of civilization” and the home today of countries like Iraq and Syria, nations used cuneiform writing—pressing symbols in soft clay and then baking it so that letters and other communications could be preserved.

Many such clay “envelopes” have been found, revealing messages inside.

However, there is a school of thought that places this “time of the end” to a far distant time. The idea is that technological and other innovations will greatly increase human knowledge and understanding.

If ever there was a time for that, we are living in it.

Whatever the correct interpretation, it is fascinating to note that the Bible’s writers wrote with precision, often reflecting elements of the day in which they were writing.

Holy Land? What About Israel?
archives most recent
More from Beliefnet and our partners
previous posts