You can find Part One of The Magician here 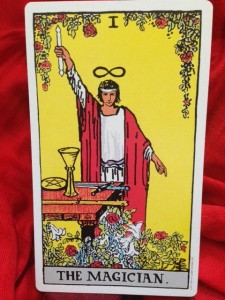 I don’t have that many Tarot decks. Less than ten decks, I think. I’d have to count them to know for sure. Trust me, this is nothing.

And in every one of these decks, the Magician has a table. Is it his table? We assume so. And yes, in all my cards, the Magician is depicted as male. Once during an on-line search I discovered a Magician card that I thought was female but no — he actually just had long blonde hair.

Upon the table we see the “suits” of the Tarot, a selection of objects: a cup, a pentacle, a sword, a wand or branch. Depending on the deck, the details of these items may vary. In this post I won’t be discussing the various metaphysical meanings of these items, but simply to point out that they are there, that there is a table, a place, that this Magician is showing you what he has. Things. Tools. Props.

The Magician is also often shown holding a Wand (a “magic wand”), his arm raised above his head, as though (it is often written) he pulls down knowledge from the heavens. His other hand points towards the earth. His body becomes a channel, a bridge between the Divine world and life here on earth. What instructions is he being given? What knowledge does he seek? What does he hope to accomplish?

When you see the Magician card, you are doing THIS. Creating, communicating, receiving and then doing. And this is partly where the notion of the manipulative character of the Magician comes from. Manipulation is not synonymous with bad. When we manipulate, we seek to cause change. Raw material into something edible, so to speak.

Is he a real Magician? Is he really telling the truth? Is he really playing tricks? Does he really have the goods? Are the items on the table merely props? Is he acting? Or is he — are you — the real deal?

I find the Magician card often poses more questions than it answers and, once again, this is some of the fun and joy and depth of Tarot. We are here, with the cards, to understand better who we are, how far we’ve come, and (for some) to read the future.

Dear Readers, do you believe in magic? 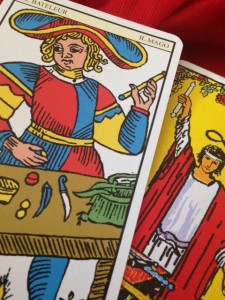