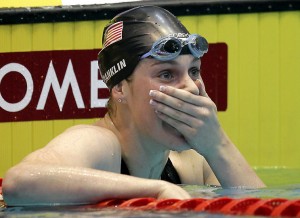 Over the weekend in Barcelona, Spain, at the swimming World Championships, 18-year old Missy Franklin entered into some elite company. Franklin joined Michael Phelps, Mark Spitz, Ian Thorpe and Kristin Otto to become the fifth swimmer to win six gold medals at either the World Championships or the Olympics.

In last year’s interview with Inspiring Athletes, Franklin talked about her growing life of faith:

“God is always there for me,” she said. “I talk with Him before, during and after practice and competitions. I pray to Him for guidance. I thank Him for this talent He has given me and promise to be a positive role model for young athletes in all sports.”

For more from that interview, click the link below: