It’s no wonder that Tamika Catchings is one of the WNBA’s most popular players. She’s accessible to the fans, she’s active in the community, she plays with as much heart as any athlete to ever step foot on the court, and her smile is an infectious reminder of her genuinely kindhearted personality.

This summer, the reigning league MVP will get even more opportunities to rub off on those around her as the star of both the Indiana Fever and the U.S. Olympic Team. In this Inspiring Athletes conversation, Catchings talks about some of the difficulties she faced as a child, how she hopes to help others through their challenges and the role that her relationship with God plays in her everyday life:

Chad Bonham: What are some of the childhood difficulties you overcame?

Tamika Catchings: Growing up I had a hearing problem and I had to wear hearing aids. Back then they didn’t have the small ones. They had the big behind-the-ear ones. So that was a struggle for me, just being different. Along with that, I had speech problems. Whether it was getting made fun of for the way I looked with my hearing aids or the way that I talked, it was a struggle. And eventually I had to wear glasses and braces, a little bit of everything. I wanted to fit in. I didn’t want to get talked about for the different things that I had going on. That was something I struggled with until I was in second grade. I got tired of being made fun of, so one day I was walking home from school and I just took my hearing aids off and threw them in a field. Of course, my mom and dad weren’t very happy with me. I knew I was going to have to face the consequences, but I just wanted to fit in. I was willing to make that sacrifice. When I got into sixth grade, my mom and dad divorced. That was another struggle. From that point, that’s when I really started to look at sports as an outlet to get away and do something I didn’t have to think about. I just went out and did it.

Bonham: Does your story help you better relate to young people and their struggles? 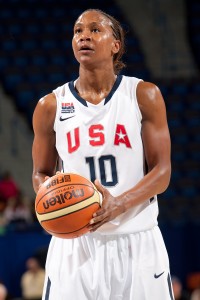 Catchings: Every single place I talk, whether it’s to a group of kids or at a university or wherever I go, I always ask them a series of questions. By the end of my time, every single person has raised his or her hand. It’s different when you hear someone talk and you have nothing in common. They’re talking about something that’s over your head. But a lot of the stuff that I talk about is real life situations; my story, what I’ve gone through, how I’ve overcome, and of course my faith. Everyone plays off my faith. Being a WNBA player gives me a great platform to be able to give my testimony and talk about my faith without pushing it on people.

Bonham: What has God taught you through these challenges?

Catchings: God has taught me about patience and about accepting myself for who I am and knowing that He formed me and made me unique. He made everyone uniquely wonderful. That’s been the biggest thing for me. Every single cell, every single muscle, every single thing about my body, He created and He formed—and even my personality. I never thought I’d be able to speak in front of hundreds of people and have a story and a testimony. That’s the thing that God has showed me—just accepting myself. And he’s also shown me patience through the injuries I’ve had, and the relationships I’ve been through and the things I want in my life. It’s like He’s saying, “Be still and be patient.” 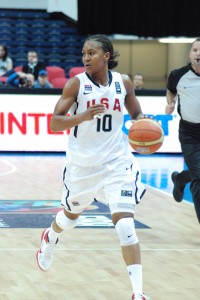 Catchings: It is one of the most exciting things. It’s almost one of those things that even when you talk about it, you can’t fully describe the feeling—just being able to be considered one of the best in your nation. And when you look at the Olympics, it goes across all fields in life—sports, politics, diversity. It’s everything combined into one. And when you’re there, everybody is watching you. What they see is how they think every American acts. I take a lot of responsibility for that. This might be the only time some of these players and these people from different countries ever come into contact with an American. You are that person that they are going to go back and talk about. It’s cool to meet a lot of new people. But there are also a lot of foreigners that come to the WNBA and play so it allows us to develop those friendships as well.

Bonham: How did it feel to be named one of the top 15 players in WNBA history?

Catchings: I can’t really think about it because I’m still here and I’m still out here loving it and enjoying every moment. I’m able to connect on the court. I’m able to connect with the fans off the court. I’m able to do all the things we do in the community. I’m still going through it. One day when I look back and I have kids and a husband and we’re sitting around just talking about life, I can tell them what I used to do. I’ll be like, “Man, I’ve been blessed.” I’ve been extremely blessed to have all these opportunities.

Bonham: What are some of the things you’re doing to reach young people within the Indianapolis community and beyond?

Catchings: I started the Catch The Stars Foundation in 2004. I wanted to make an impact on kids. I think about all the people that have come across my path from the time I was little girl to where I’m at today. There were so many people that wanted to help me. And some people didn’t even know. They were just a positive influence and encouragement in a time when I needed it. I want to help these kids catch their stars one dream at a time. That’s our mission right there.

Click HERE to view a video presentation of this interview.