Last year, I posted an interview with Nashville Predators center Mike Fisher (and husband of country music superstar Carrie Underwood) who was promoting the biography Defender of Faith. More recently, I had the chance to talk to Fisher again–this time for the forthcoming FCA Hockey New Testament project. With the NHL playoffs underway this week (and the Predators taking on Detroit in the first round), I thought it might be a good time to share some of that conversation from earlier this year–the topic was trust:

Chad Bonham: What is your definition of the word trust?

Mike Fisher: Trust is having total confidence in something and having faith in someone or something. It’s not one of those things you have a little bit of. To me, that’s what trust is all about.

Bonham: Who were your examples of trust growing up? 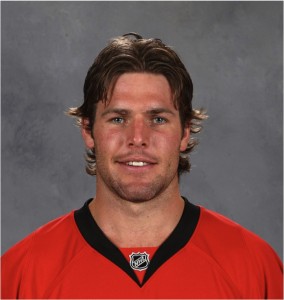 Fisher: It was my parents. I can remember coming downstairs before school every day and my mom would be reading her Bible and doing her devotion and praying. Both my parents were prayer warriors. They had a lot of faith in God and that was a great example. I had my first serious knee injury when I was 19. After the game, I knew I was done for the year. My mom called me and said, ‘Remember, God doesn’t make mistakes. Trust in Him and it will be okay. He’ll use it for good.’ At the time, I didn’t want to hear it but in the long run she was right. I’ll never forget some of those moments.

Bonham: What have you learned from the Bible about trust?

Fisher: One of my favorite scriptures is Proverbs 3:5-6: “Trust in the Lord with all your heart and don’t lean on your own understanding. In all your ways acknowledge Him and He will direct your path.” That’s a perfect example of trust. Sometimes you can trust and hope that everything is going to be rosy and God doesn’t promise that. He promises that He’s got our backs and He’s prepared a place for us. We need to keep that perspective that it’s not just about the here and now. That’s exciting. We know we’re going to go through ups and downs and we’ve all experienced that, but it’s about surrendering some of that control, which we all find so hard to do, but it’s really freeing when you can do that.

Bonham: What do you learn from the life of Christ about trust?

Fisher: His ministry was showing love to others and trying to spread the Gospel so people would trust in Him and have that faith. What He did on the cross was the ultimate display of trust. He surrendered Himself to the cross because He knew that’s what He needed to do. He sacrificed for us and He knew that God would raise Him up. Jesus gave up control on the cross and that’s what the Lord wants us to do in a lot of areas in life. We know how hard that is, but imagine being in Jesus’ position.

Bonham: Are there any other examples of trust from the Bible that inspire you?

Fisher: I can’t think of anyone better than Job. He had everything and He loved the Lord. He lost his family and everything. All he had left was the Lord and He still trusted Him and He would not curse God. Through all of that, a lot of things were restored back to him, but ultimately he was a rock. I’d only hope if that happened to me that I could do the same.”

Bonham: What are some situations in your career where you had to trust God’s plan?

Fisher: I’ve had a shoulder problem for the last few years. It’s been tough. So I ended up having shoulder surgery last summer. It was going through my recovery and things weren’t going too well. I was pretty frustrated and I ended up having another surgery in August because I had so much scar tissue. I just remember a few nights where I was so frustrated because I couldn’t get my arm over my head. I was expected to be back and doing pretty well in full workouts, but I had a hard time and I was way behind. In my lack of trust, fear started to creep in. I wasn’t totally giving things up to the Lord. But one night I was so frustrated and I had to just give it to the Lord and pray about it and that really helped.

Fisher: Before (Carrie and I) got married, trust was one of the three things our pastor touched on in our counseling. It’s really second important only behind your relationship with Christ. We both live different lives and we’re on the road a lot. We trust each other with all our hearts. It makes it so much easier to know I can trust her character and who she is as a person. That’s the same way it is with the Lord. It’s comforting. It’s freeing. It brings a lot of peace knowing that you don’t have to worry about anything and you can trust in Him. If you don’t have that, good luck.

Bonham: Do you think God set marriage up to mirror the relationship He wants with the Church?

Fisher: I think so. Outside of our relationship with the Lord, marriage is right next to it. It’s an important relationship and you hear that analogy all the time. There’s no better one than that for sure.

Bonham: What is your advice to players, coaches and other readers when it comes to the issue of trusting God?

Fisher: It starts with some of the little things. Sometimes trust takes time. We all love to be in control, but when you start to give some of that up, it’s freeing. Start with some of the little things. Give those things up to the Lord. Ultimately the most important decision you can make is giving your life over to Christ and trusting Him with it. That’s an amazing thing. When you can do that, some of your fears begin to fade. Sometimes I think about some of my fears and I always think about the scripture, “If God is for you, who can be against you?” What better person to have on your team than the God who made you.