With the NASCAR season wrapped up for another year, Inspiring Athletes thought it might be a good time to look back at an exciting nine months that saw a number of unpredictable twists and turns.

Trevor Bayne kicked off the crazy year with his improbable win at the Daytona 500. We also saw his best friend Ricky Stenhouse Jr., end the season with a dominating Nationwide Series championship. Justin Allgaier had a solid year with an NNS victory at Chicago and Sam Hornish Jr., breathed life into his stockcar racing career with a late season NNS victory in Phoenix.

Other highlights included a down-to-the-wire Sprint Cup championship between Tony Stewart and Carl Edwards. Amazingly, the two drivers finished one-two at the Ford 400 in Homestead where Stewart outlasted Edwards and won his third title by just one point.

Other notable events included the announcement of Darrell Waltrip’s selection for the NASCAR Hall of Fame, Morgan Shepherd’s 70th birthday, the end of Mark Martin’s time at Hendrick Motorsports in the #5 car, and trouble for Kyle Busch (including an off-track speeding violation and an intentional wrecking of Camping World Truck Series competitor Ron Hornaday) that resulted in the controversial young driver’s suspension and called his bright future into question.

To properly wrap-up the season, Inspiring Athletes has brought together all of the interviews and news stories posted this season. Make sure to click on the names below to read more about these popular figures within the NASCAR community and some of the events that impacted the racing world in 2011:

And here’s a look back at some of the NASCAR stories Inspiring Athletes reported during the 2011 season: 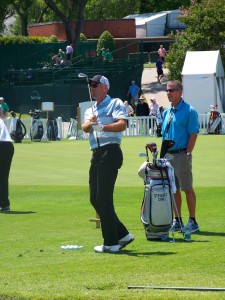 The Best of Inspiring Athletes: PGA Edition
archives most recent
More from Beliefnet and our partners
previous posts