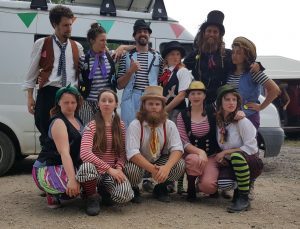 In 2014, the number of forcibly displaced people in the world numbered almost 60 million—that’s a 40 percent increase since 2011. The largest groups come from Syria, where civil war rages and explosions rip through the concrete walls of homes on a regular basis. Other refugees from all across the Middle East and Africa flee situations that are just as deadly.

Among these fleeing masses are the most vulnerable of us—children. These young ones have often known nothing but hardship in their short span of years, and the dangerous trek across war zones, through forests and swamps and dry, arid plains takes a massive toll on their helpless minds and bodies.

When these refugee families reach their destinations, their lot doesn’t always improve. They’re far away from their homes, sick, exhausted, and afraid. Often, they live in temporary camps, devoid of the amenities and comforts that we take for granted. Amongst these children, there are many tears and few smiles.

But that’s exactly what the members of The Flying Seagull Project are here to change.

These men and women are clowns, musicians, dancers, performers, playworkers, play specialists, and more, and they focus on working with refugee families who are living in the harshest environments, giving them one of the rarest of gifts: laughter.

“Happiness matters like food, like water, like warmth, like shelter,” said Flying Seagull actor Miriam Needham in an interview with The Guardian. “I’ve seen the change it can bring to people, how it can make people strong just to laugh. Happiness and joy are contagious—it goes from the children to the parents out to the whole community.”

This colorful troupe of circus-like performers travels all across Europe, partnering with local organizations to bring smiles to the disadvantaged. But they aren’t just fun—they’re also informed. Their organizational website lists the research-proven psychological and physical benefits of play, which include improved motor functions and immune systems, the development of a higher IQ, greater emotional resilience, and a reduction in anti-social behavior.

The development of a child is a complex thing. We often talk about fulfilling basic needs—things like food, water, and shelter—but play doesn’t normally come up in that conversation.

It should. Within a decade, these children are going to grow up, and without intervention, their childhood experiences may become psychological problems that will be far more difficult to work out in adulthood. The very tragedy they fled from can a deeply-embedded part of their consciousness.

Without the Flying Seagulls, these children might have missed out on these tangible benefits.

You might think that language barriers would keep these performers from meaningfully interacting with refugee populations, but words are impediment—smiles and laughter are a universal language that captivate and communicate.

A video hosted by the Facebook page of BBC Three shows exactly what the Flying Seagull performers do when they’re amongst the refugees. A bearded man in a top hat and striped stockings rides a bicycle through camp, calling to children as he passes. A woman plays the violin as she walks, a troupe of children following gaily behind. A dramatic, black-swathed magician performs for a group of excited kids in beneath a red-and-gold cloth tent.

And in all of these moments, these children are no longer refugees. For a while, they’re no longer caught between the crushing monoliths of opposing political systems or warring regimes. They’re not running away, afraid, or lonely.

They’re just children, laughing and smiling. As they should be.

These kids appreciate what the Flying Seagull performers do for them. “Before, the kids doesn’t have anything to do,” said one child. “Just they stay in the tent. When [the Flying Seagulls] come, you make something from nothing.”

In the midst of devastation, this is a much-needed introduction of passionate, creative humanitarianism that benefits not only refugee children, but their parents, as well. When their kids are happy, and start acting like children again for the first time in months or years, this is a huge relief for worried moms and dads.

This produces a ripple effect that reaches far into the future. In using play to help refugee children develop, both mentally and physically, the Flying Seagull performers are sowing seeds that will one day blossom into a new generation of healthy, happy people who aren’t defined by their pasts.

If you want to help them sow these seeds, you can easily donate to their cause—every bit helps in the quest to bring happiness to a child.

It might be hard to imagine a world in which silliness is as valuable as food and rare as gold, but for millions, this is reality. But the Flying Seagulls show us that wherever there is suffering, wherever there are tears and lowered heads, a merry few will take it upon themselves to reunite humanity with happiness.

And that is an inspiring thought.