How to Let Go of Negative Patterns 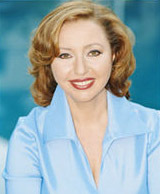 We all have habitual, negative thinking, feeling and
doing patterns that sabotage our success, happiness and well-being. They become
so ingrained that we think we have no power to change them. They simply become
part of our daily life.
Being passionate about Greek mythology and archetypes, I thought of how the
myth of Sisyphus might relate to our lives. For those of you who aren’t familiar
with the myth, let me tell you about it.
Continue reading How to Let Go of Negative Patterns.
Agapi Stassinopoulos is an author and motivational speaker. She was born in
Athens, Greece and educated at the Royal Academy of Dramatic Arts in London. She
holds a Master’s Degree in applied psychology from the University of Santa
Monica. She is the author of “Conversations with the Goddesses” and
“Gods and Goddesses in Love,” which has been translated in seven
languages. Her one-woman show, Conversations with the Goddesses, became
a PBS special and aired nationwide.She is a columnist for the Huffington Post.
Read more from Agapi.