Many of us aspire to live to a ripe old age and look forward to the “Golden Years” of retirement.  After living for a full century and delivering more than 15,000 babies, Dr. W.G. “Curly” Watson won’t stop! Celebrating his 100th birthday on February 25th, the Augusta, Georgia OB-GYN physician is the oldest practicing MD in the United States.

Watson received his bachelor’s degree in 1932 but could not afford medical school.  He worked on a farm for the next seven years at a wage of about fifty cents a day and finally saved up enough to enroll in the Medical College of Georgia in 1939. He became a resident there in 1947 and has been practicing ever since.

He doesn’t deliver babies anymore but still sees patients daily at the women’s center named in his honor.  Having welcomed into the world more people than populate many U.S. towns, Watson mused, “I don’t go anywhere that I don’t see a patient of mine!” 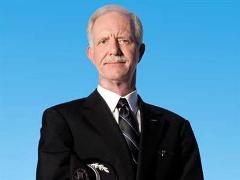 Capt. Chesley "Sully" Sullenberger of "Miracle On The Hudson" Retires
archives most recent
More from Beliefnet and our partners
previous posts