Christian recording artist Lauren Daigle graced ‘The Voice’ stage, performing her song “Hold on to Me” for the show’s finale. Her ad-libs at the end of the song gave the audience chills.

Following the performance, the Christian singer said she is “still on cloud 9 after an incredible time” on the show.

“There are so many moving pieces in days like this, and it all happens so fast – but every moment is just so much fun,” Daigle said. “Very grateful.”

She later said that her “Voice” performance was one of her absolute favorites.

Social media users praised the “You Say” singer following her performance, even tweeting that she took the audience to church!

One user tweeted, “You are beautiful, and your performance was special. I just wish I would have remembered to record it so I could watch it over and over again.”

Another user tweeted, “My wife and I danced! You can hear the love of Christ in your voice.”

Watch the epic performance below. 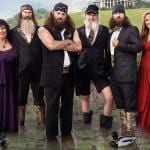 Dysfunction to Dynasty: The Rise of the Robertson Family
archives most recent
More from Beliefnet and our partners
previous posts