Jonathan Isaac, Orlando Magic’s forward player, was the only player to stay standing during the national anthem at a recent game. He also chose not to wear a Black Live Matter shirt.

While talking to the Bleacher Report’s Taylor Rooks, Isaac cited the Gospel for why he didn’t kneel or put on the shirt. He said for him, it didn’t make sense as the answer.

“My life has been supported by the Gospel of Jesus Christ. Everyone is made in the image of God and we all share in His glory. Each and every one of us each and every day do things we shouldn’t do. We say things we shouldn’t say. We hate and dislike people that we shouldn’t hate and dislike. And sometimes it gets to the point where we point fingers about whose evil is worse, and sometimes it comes down to simply whose evil is most visible.

“I felt like I wanted to just take a stand on … I felt like we all make mistakes but I think the Gospel of Jesus Christ is that there’s grace for us and that Jesus came and died for our sins, and that we all will come to an understanding of that and that God wants to have a relationship with us.”

He continued, “We all fall short of God’s glory, and at the end of the day, whoever will humble themselves and seek God and repent their sins, then we could see our mistakes and people’s mistakes and people’s evil in a different light, and that it would help bring us closer together and get past skin color, get past anything that’s on the surface that doesn’t really deal with the hearts of men and women.”

The player further explained, “I didn’t feel like putting that shirt on and kneeling went hand in hand with supporting black lives.”

Many fans were outraged, but Isaac saw a lot of support too. Former NFL coach Tony Dungy tweeted about the incident.

“We’ve said people should be able to exercise their right to kneel during the National Anthem and we should listen & hear their reasons why. When Jonathan Isaac chooses to stand we should do the same,” Dungy wrote. “He explained his reasons very clearly-he wants to stand in prayer. I say Amen!”

“I think he was making a statement that I don’t have to follow the actions of the crowd no matter how many others are doing it. He is man enough to stand for his conviction against tremendous peer pressure to go along,” Dungy wrote in a follow-up message. 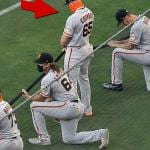 Giants' Pitcher Sam Coonrod Doesn't Kneel For BLM, Says He Only Kneels For God
archives most recent
More from Beliefnet and our partners
previous posts