Jon Steingard, the lead singer of the Christian rock band Hawk Nelson recently revealed to his fans that he no longer believes in God.

In the lengthy Instagram post, he says he had been “terrified” when thinking of writing the statement.

I’ve been terrified to post this for a while – but it feels like it’s time for me to be honest. I hope this is not the end of the conversation, but the beginning. I hope this is encouraging to people who might feel the same but are as afraid to speak as I am. I want to be open. I want to be transparent with you all – and also open to having my heart changed in the future. I am not looking for a debate at all – just a chance to share my story in the hopes some good can come from it. I love you all.

“But it feels like it’s time for me to be honest,” he wrote. “I hope this is not the end of the conversation, but the beginning. I hope this is encouraging to people who might feel the same but are as afraid to speak as I am. I want to be open. I want to be transparent with you all – and also open to having my heart changed in the future.”

Steingard also looked back on his Christian upbringing, reflecting that he has had “the word ‘Christian’ in front of most things in [his] life.”

“I am now finding that I no longer believe in God,” he said.

“I still find myself wanting to soften that statement by wording it differently or less specifically — but it wouldn’t be as true,” Steingard shared. “The process of getting to that sentence has been several years in the making.”

When it comes to leading Hawk Nelson, Steingard wrote, “If you’re someone who follows me because of Hawk Nelson, and my involvement in Christian music, you are probably thinking, ‘Wait — were you lying to me the whole time? Were you just pretending to be a Christian? What about all those songs you wrote? Did you mean those?’

“The short answer is that I was not lying. I did believe those things at the time. I may have been pulling on the threads of the sweater, but there was still some sweater left back then.”

Steingard also indicated that he would be leaving Hawk Nelson in the future. “While I know I can no longer stand on stage and in good conscience sing songs like ‘Drops in the Ocean’, I no longer fear losing my place in Christian music. I know this means giving it up voluntarily.”

The Canadian musician joined the Christian band in 2004. He has played a pivotal part in the group’s last seven studio albums, including 2018’s ‘Miracles.’ 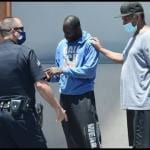