If you’re a fan of Stephen Colbert, you probably know he’s a strong man of faith. What you may not know is that there was a time when he was convinced of his own atheism after losing confidence in God.

“The Late Show” host isn’t uncomfortable talking about his Catholic faith. He grew up in the Catholic Church. While he was taught to respect the church, he was never afraid to challenge and question church doctrine which may come as no surprise given he is one who challenges things that don’t make sense.

In a recent conversation on the talk show “Faith in Focus,” Colbert shared that there was a time when his faith was weak.

He shared how he struggled with doubt in his younger years. He said to the show’s host, Rev. James Martin who is also a Jesuit priest and editor at large at the Catholic magazine America that he was “convinced of my own atheism” in his early 20s.

“I had lost my faith in God, to my own great grief,” Colbert said. “I was sort of convinced that I had been wrong all this time, that I had been taught something that wasn’t true.”

Then something happened that changed everything.

Following graduating from Northwestern University in 1986, Colbert joined a comedy troupe. At the time he was 22. One cold night, he was walking through the streets of Chicago when a stranger handed him a pocket Bible. In it, there were Scriptures including the books of Psalms and Proverbs.

What stands out in his memory is that the pages were frozen stiff, so hard that he had to crack the book open. In the pocket Bible was an index listing verses to read based on the emotions someone might be experiencing.

He was feeling anxious at the time, so he turned to the Bible verses associated with anxiety.

This particular passage was on Jesus’ Sermon on the Mount:

He felt those words were speaking to him directly. Immediately after reading them, he felt lightened, Colbert shared.

“I stood on the street corner in the cold and read the sermon,” he said. “And my life has never been the same.”

Now he tries to carry a copy of the Bible with him wherever he goes.

In a GQ interview, he reflected on tragedies in his life and explained how his faith shapes his outlook, saying, “I am here to know God, love God and serve God.” Can you believe he also teaches Sunday School?

Learn more about Colbert’s faith in the video below. 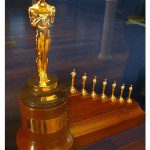