Singer Tori Kelly isn’t afraid to share with others that she has a relationship with God.

In an industry full of sin and temptation, Kelly stays grounded in Christ. At the age of 14, Kelly began getting recognition after loading videos of her music to YouTube. She’s now a Grammy-winning artist that has millions of fans around the world.

Like many Christians, Kelly grew up in the church because of her parent’s beliefs. It wasn’t until later as an adult, though, that she accepted God for herself. She said once she “surrendered” to God, the doors began to open and the rest is history.

“My faith is everything to me! I did grow up in the church but I think maybe like some other people who grow up in the church you kind of get to a point where your faith really becomes your own and it’s not about what your parents say or what they believe,” Kelly shared with YouVersion. “It’s really like, ‘oh no, this is real to me. I have experienced the presence of God and I know that this is my own faith.’”

Kelly has been faced with temptation over and over again while working in Hollywood. She reminds herself frequently that her career comes second to her faith.

The secular world has also taught the masses to idolize celebrities, which is difficult given she knows her true idol is Christ.

“In my line of work it’s kind of built up to be about me…which is scary. It’s terrifying,” Kelly explains. “That’s the biggest challenge.”

“One day you’re going to grow into your own skin and be the girl that God uniquely made as you. And you don’t have to compare yourself to anybody,” Kelly said at the end of the testimony, in a message to her 12-year-old self and anyone else who might be struggling with finding their true identity. “I didn’t have to change myself; I can just be myself.”

She also works hard to ensure she doesn’t idolize her own success.

“I can’t rely on these accomplishments, these goals, and these dreams, which are great and good things…but even good things can be idols.” 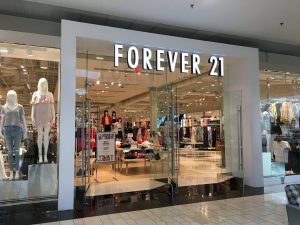 Forever 21, Founded by Christian Owners Do Won Chang and Jin Sook, Files For Bankruptcy
archives most recent
More from Beliefnet and our partners
previous posts