The “Serum Run” of 1925 is the subject of the new independent motion picture release “The Great Alaskan Race,” releasing Oct. 25 from P12 Films. The film recounts a deadly diphtheria outbreak in Nome, Alaska where the only means of getting antitoxin was through dog sledding led by dog breeder, trainer and racer Leonhard “Sepp” Seppala.

Actor Brian Presley portrays Seppala and also served as a first-time director and writer for the production. He was warned it was an ambitious first project but proceeded with a vision for the story.

“I started working on this project over nine years ago,” he said. “I had everybody in town tell me there’s no way you’re ever going to make this movie, especially being a first-time director. There’s no way you can be in front of the camera as well, with dogs, kids, even bears, 12,000 feet (above sea level) in a period piece. But, you know, persistence pays off. And I knew in my heart of hearts, I could tell this story and just never gave up on that.”

To that end, Presley credits a lot of preparation in getting the film done, including selecting the town for shooting and keeping the pre-production start date in mind to keep from missing the winter months for shooting. Presley did a test shoot with the dogs and then cut a trailer from the test shoot, which was able to get the film greenlit.

“Half the battle is having all your ducks in a row and then having a game plan to execute it,” he said.

The actor-turned-director, who previously appeared in projects such as “Transporter: Mechanic,” “Touchback” and “Home of the Brave,” was driven by what he felt was a calling to deliver an inspirational project to theaters.

“The gift that I have is to tell stories, inspirational stories—not necessarily faith based —but stories that can bridge a faith audience and secular audience around stories of hope, stories that show flawed human overcoming unimaginable obstacles. That’s something I can relate to.”

He also believes there should be more entertainment, like “The Great Alaskan Race,” that is geared toward families, “stories of hope and stories of truth.”

“There’s enough in the world today that can make people feel bad,” he said.

Presley also wanted to highlight some of the “forgotten heroes,” which included the dogs, some of whom made the 700-mile journey in the subzero temperatures. The fact that the dogs and sled drivers were able to make the journey was nothing short of miraculous, he believes.

“There’s no explanation other than they were being guided by a higher power,” he said. “I really wanted to show visually in the movie, how small they are compared to the environment in the world they’re traveling in. It relates to how small we are in this grand universe and how big God is.”

“I wanted the mayor to feel like, kind of everybody’s grandpa, just to have that tough presence,” he said. “He may have been a musher in his day and work the mines, not afraid to get his hands dirty. I wanted to have a little bit of a contrast with him and the doctor who wanted the doctor to have an Ivy League feel, have a medical feel, but also have that warmth, kind of like everybody’s father. Treat possessed all of those qualities. And the two of them together are great.”

“I grew up watching Henry Thomas,” he said. “I mean to have Elliot from ‘E.T.,’ who I remember from elementary school, it was just so great. He’s been a part of so many films that have inspired me over the years. It was an honor to have him come be in the first film I directed.”

Beyond the inspiring story, the backstory of the film is also compelling. Presley said he intends to split proceeds with five worthy charitable organizations, including “Hope is Alive,” an addiction recovery program, Pastor Craig Johnson’s “Champions Club” for special needs children, “Battle Dawgs,” a program pairing war veterans with service dogs, and organizations that cares for dogsledding dogs.

“I want people to enjoy the movie and enjoy the experience and, just the true miracle that this story is,” he said. “I think it’s just an added bonus to know by coming into enjoy this movie you’re also helping change lives with these organizations that we’re giving to.”

Guest post by DeWayne Hamby. DeWayne is a communications specialist and longtime journalist covering faith-based music, entertainment, books, and the retail industry. He is the author of the book Gratitude Adjustment. Connect with him at www.dewaynehamby.com or on twitter – @dewaynehamby. 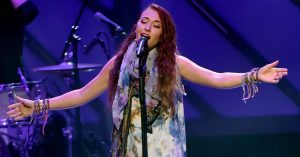 'You Say' By Lauren Daigle Breaks Record, Becomes Biggest Christian Song of All Time
archives most recent
More from Beliefnet and our partners
previous posts