Steph Curry Shares Moment He Came to God: “I Felt the Calling”

Stephen Curry is an incredible ball player, but that’s not all that defines him. The NBA star is all a devout and loyal Christian.

In Curry’s latest episode of Facebook’s “Stephen vs The Game”, Curry lays out the exact moment that he became a Christian and how it changed the course of his life. The episode also featured Curry’s parents, his father Dell and mother Sonya.

Curry grew up in a Christian home, but early on in life he didn’t feel the same desire for the faith that his parents did. His family attended church every Wednesday and Sunday, leaving Curry frustrated that he couldn’t spend that time with friends.

“When all your other friends are doing these things and you’re having to say no, you get used to saying no,” Sonya said of their church schedule.

His parent’s choice to bring him to the church prove to be successful. He was finally saved in the eighth grade while listening to a youth pastor named Jason, he said.

“I felt the calling, went down to the altar [and] gave my life to Christ. That became the beginning of my own personal journey,” he said. “I think my faith is about the personal relationship more so than the following a certain religious tradition, a religious practice.”

The Golden State Warriors guard continued, saying it was important to “make sure you’re feeding your spirit with the right things versus what this world is throwing at us.”

Curry understands how faith can be difficult, and is not always a solid belief.

He also chooses to put his faith first in all things, inluding basketball and his relationships.

“I put believer first, because that is supposed to be the roots of everything that I do as a believer, as a husband, as a father, and on down from there.”

Curry said he tries to take advantage of every opportunity he has to share his faith, but more than anything he adds that he wants his actions to speak for themselves. One way he lives out his faith is by placing his favorite Bible verse on his shoes.

“My mom challenged me to find a verse that I could rely on to give me strength, give me a sense of purpose and to remember who I was playing for every time I lace up my sneakers,” he shared. “It reminds me why I am blessed with these talents, where I get my strength from, and who I am playing for.”

Tell us what you think. 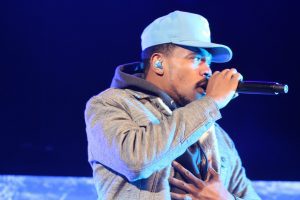 Chance the Rapper on God's Help: 'A Prayer Really Goes a Long Way'
archives most recent
More from Beliefnet and our partners
previous posts