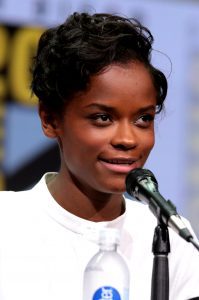 Marvel’s “Black Panther” movie premiers Thursday, February 15, 2018, and critics are already hailing the movie for both its plot and how it breaks barriers. Letitia Wright plays one of the central characters, Princess Shuri, who is said to be one of the smartest characters in the Marvel Cinematic Universe, a world inhabited by super-geniuses like Tony Stark. There are also rumors that Shuri will be getting her own movie, and Wright said that she would jump at the opportunity if it occurred. “If it’s meant to happen, I would happily do it,” Wright said. “But you can’t have a Shuri movie without T’Challa [Shuri’s brother and titular character of ‘Black Panther’]…So, I guess, the question is: when can we have ‘Black Panther 2’?”

Despite Wright’s current enthusiasm, the 24 year old star almost walked away from acting entirely. Her near abandonment of her passion occurred during a “very difficult” time in her life, but God led her back to acting. “I was going through a lot,” Wright said. “A very difficult time in my life and I just needed to take a break from acting because I really idolized it. So I came off from it and I went on a journey to discover God and my relationship with God…I became a Christian and it really gave me so much love and life within myself…I felt secure and I felt I didn’t need validation from anyone else or from getting a part.”

Wright claims that separating her sense of self-worth from the parts she gets has helped her as an actress. “My happiness wasn’t dependent on [getting a part]. It was dependent on my relationship with God,” Wright said. “I am centered in who I am and I’m really grateful. I’m not perfect especially as a Christian. You’re not perfect but you’re walking every day and trying to just stay connected…It’s helped me a lot, and I’m really grateful.”

There is more for Wright to be grateful for as well. When she was 20, she struggled with depression. “I was in the dark going through so many bad things,” she said. Wright credits God with saving her from her depression and revealed that she prays when she is preparing for her acting scenes. “Everybody has their thing that they’re truthful about. My thing is just a love of God.”

Wright landed her big break in the 2016 drama “Urban Hymn,” but it is “Black Panther” than has truly catapulted her to stardom. She is also likely to reprise her role as Shuri in the upcoming Marvel blockbuster “Avengers: Infinity War.” While “Black Panther” does not set up “Infinity War” as some Marvel movies do, Shuri’s fictional home, Wakanda, is set to play an important role in “Infinity War.” Hopefully, this means that Wright will continue to appear on screen and make use of the gift God has given her.