Famous Christian Song, “I Can Only Imagine,” Becomes a Full Length Film 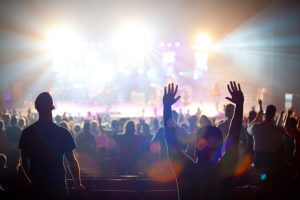 MercyMe’s song “I Can Only Imagine” has inspired millions of people over the years with its simple melody and powerful words. The song was said to be written in ten short minutes. In reality, however, the well-known lyrics of this classic Christian song are the result of a lifetime of experiences.

“I Can Only Imagine” is MercyMe’s best-known song, and now it is being made into a feature length movie. The film will follow the life of MercyMe’s lead singer, Bart Millard, and the trials that shaped him and his famous song.

Millard became a Christian at a young age, but his life was not easy. He was abandoned by his mother at the age of eleven and left alone with his abusive father. His active imagination and love of music served as an escape from the terrible reality that was his home life. As he aged, Millard took up football in the hope that he could somehow use the sport to connect with his father. Millard suffered a career-ending injury, however, and took refuge once more in music. A teacher of his saw the potential he was hiding, and gave Millard the push he needed to pursue his dream of becoming a musician.

Pursuing his musical dreams let Millard escape the terrible past he shared with his father as well as his broken relationship with Shannon, the childhood sweetheart he left behind. Millard took to the road in an old, beat-up tour bus with the other members of his band. The group was named MercyMe in honor of Millard’s grandmother’s favorite expression. The hopeful group was guided by a grizzled man who was an insider in the music industry, and they came to be one of the best-known Christian groups in the nation.

The film is directed by the Erwin Brothers who also directed “October Baby”, “Moms’ Night Out” and “Woodlawn.” “I Can Only Imagine” will star J. Michael Finley as Bart Millard. “I Can Only Imagine” is Finley’s screen-acting debut, but he is a practiced stage performer who debuted on Broadway in 2014 in Les Miserables. Madeline Carroll plays Millard’s sweetheart, Shannon, while Dennis Quaid takes on the role of Arthur Millard, Bart Millard’s abusive father. Trace Adkins, Priscilla Shirer and Oscar winning actress Cloris Leachman also appear in the film.

“I Can Only Imagine” is a powerful story that reminds viewers that there is no one who is too far from God’s love or from an eternal home in Heaven. The film premiers in theaters on March 16, 2018, and the trailer is currently available online.