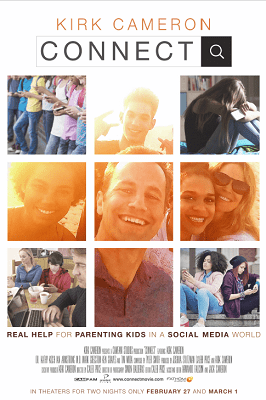 In “Kirk Cameron: CONNECT,” family advocate Kirk Cameron takes on one of the greatest challenges facing parents today: the rise of smartphones and social media. These devices have become a cultural rite of passage among children, and parents are buying phones for younger and younger children. Ever mounting evidence, however, points toward a myriad of dangers buried in the modern screen-obsessed world.  “[Too much technology] is deeply effecting kids’ perceptions of themselves, their perception of their moral values, their understanding of the world around them, their sense of identity and purpose and their ability to have real relationships,” Kirk Cameron said. “These are all things that are critical for our kids to grow up to be healthy adults… That’s why I made the movie ‘CONNECT,’ to offer real help parenting kids in a social media world.”

With his six children reaching “smartphone age,” Cameron grew increasingly interested in the effects technology and social media had on children. “All you need to do is turn on the news or Google “kids and social media,” and you’ll find endless articles and videos about the concerning effect of too much technology on children,” Cameron said. “Technology is terrific, and we can use it for so many good things…but we have to be careful that we don’t give our kids tools that are more powerful than we have the ability to handle at a young age. A car is a great piece of technology, but I’m not going to give it to my 10 year old.”

The questions of “how young is too young for a phone” and how to help children prepare for their inevitable exposure to social media haunts many parents of the so-called “digital generation.”  According to Cameron, there is not necessarily a single age where children old enough for a smartphone. “I think that young people should have a phone when they need it,” Cameron said. “Not when they want it or when peer pressure is getting the best of them to have one…If your children are babysitting and the house does not have a landline but the parents need to get a hold of [the babysitter], that may be a time [your child] needs to have a phone. But that doesn’t mean that it automatically has to include access to Facebook, Instagram and SnapChat.”

When it comes to social media, the issue becomes a bit thornier. “Parents have two reactions to social media,” Cameron said. “They either check out and say ‘This is too much to deal with…’ or parents get so scared of the whole thing that they try to wall their kids off from technology. But eventually the world is going to catch up with your kid, and a time is going to come when they need an email address or access to a phone.”

“CONNECT” is likely to resonate with parents far more than most documentaries about social media and children because of the angle Kirk Cameron took with its creation. “I’m making this movie as a father, not as a neuroscientists or a professional family therapist. So, I have the same kinds of concerns that every mom and dad have that deeply love their kids.”

“Kirk Cameron: CONNECT” offers real help for parenting kids in a social media world and screens exclusively in movie theaters nationwide for two nights only on February 27 and March 1. Tickets are available at FathomEvents.com, and the trailer is available on YouTube.

**Update March 15, 2018: Due to the overwhelming response to “Kirk Cameron: CONNECT,” the film will return to cinemas nationwide for two nights only on Tuesday, March 20 and Saturday, March 24. Showings for both days will take place at 7:00 p.m. local time. Tickets are available now online or at participating theater box offices. The original screening dates sold-out across the nation, so get your tickets now!**