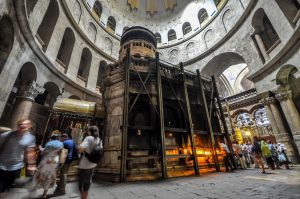 A large shrine called the Edicule stands in the center of the Church of the Holy Sepulchre and marks the location that Christian tradition identifies with the tomb of Jesus Christ. The limestone tomb itself has long been closed, in part to preserve the delicate limestone, but the Edicule is open to the public. Everyday hundreds of pilgrims walk through this shrine and visit the site where Christ’s body was laid. These Christians pray, light candles and kiss the altar that marks the location of Christ’s tomb. While the faithful flock to the massive Holy Sepulchre in the Old City of Jerusalem, religious scholars and historians have long doubted that the tomb beneath the Edicule was actually used by Jesus Christ. Recent information uncovered by the National Technical University of Athens, however, has upheld the beliefs of the faithful. On December 3, a one-hour National Geographic event will televise the evidence supporting the ancient claim that the Holy Sepulchre does mark the burial place of Christ.

The Church of the Holy Sepulchre has been destroyed and rebuilt multiple times. The first church was built in the fourth century on the orders of Emperor Constantine, the first Roman emperor to practice Christianity. Around 325 AD, Constantine sent representatives to Jerusalem in search of the burial place of Jesus. The representatives were led to a pagan temple that Roman Emperor Hadrian had built in the early second century. Historical sources suggest that Hadrian had deliberately built the temple over Christ’s tomb in order to show the dominance of Roman paganism over Christianity. Eusebius, the Bishop of Caesarea, wrote that Constantine had the Roman temple razed, and Christ’s rock-cut tomb was revealed. Constantine had a church built over the tomb to mark the burial place of Jesus.

Constantine’s church was destroyed in 614 by the Persians, but it was later rebuilt. In 966, the dome was destroyed again, and the church razed entirely by Fatimid Caliph al-Hakim in 1009. Parts of Constantine’s Anastasis survived due to its sturdy construction and being submerged beneath debris. The tomb itself remained untouched only because it too was buried in the rubble of the destroyed church.

The Church of the Holy Sepulchre as we know it was rebuilt by the Crusaders in the eleventh century, and little has changed in the church since. The repeated destruction of the Holy Sepulchre, however, left historians and religious scholars with doubts that the tomb in the “newer” church was truly Christ’s burial place. Many scholars believed that the tomb only dated back to the Crusader period.

The National Technical University of Athens has recently proven that the tomb is much older than scholars believed it to be. Necessary renovations on the Edicule exposed the tomb itself for the first time in centuries and allowed researchers to date the stone of the holy site. While there is, unfortunately, currently no way to prove that the tomb was used specifically by Jesus Christ, scientific evidence does support the tradition that identifies the tomb as the burial place of Jesus.

Until the renovations on the Edicule began, archaeological and architectural evidence suggested that the oldest part of the tomb was no older than the eleventh century. When the tomb itself was opened for just 60 short hours, that theory was disproven. Buried beneath the altar, smooth Crusader-era marble and a layer of debris was a slab of marble inscribed only with a simple cross. This final and oldest slab had not been seen for centuries. No one knew it was there. When the stone was dated, it showed that the marble was from around 345 AD, the right time period for it to have been laid in place by Constantine’s representatives.

This discovery vindicates, in the eyes of many, centuries of Christian tradition. The construction of the tomb itself also supported the claim that the Holy Sepulchre was built over the burial place of Christ. Directly beneath the Constantine-era marble, was an intact limestone shelf. This shelf is likely where Christ’s body rested 2,000 years ago.  Similar shelves and niches have been discovered in other first century Jewish tombs in and around Jerusalem.

The location of the Church of the Holy Sepulchre also fits biblical descriptions of Christ’s burial place. At the time of Christ, the land where the Holy Sepulchre now stands would have been outside of Jerusalem. It was not until several years after Jesus died that the walls of Jerusalem were moved outward, putting Golgotha and the tomb inside the city.

The discovery of evidence supporting the traditional location of Christ’s burial site has caught many scientists and historians off-guard. No one expected to unearth the Constantine-era marble or for researchers to confirm that the Edicule encloses the original limestone walls of the burial cave.

National Geographic was onsite when these incredible revelations came to light. Camera crews and archaeologists associated with the renowned magazine got to witness the confirmation of religious history. Photographs are available to view online, and National Geographic is working on a special one-hour television event that documents the incredible discovery. “The Secrets of Christ’s Tomb: Explorer Special” will premier on Sunday, December 3 at 9/8 central and air in 45 languages across 171 countries. National Geographic has already released a short clip of the special and several  news  releases accompanied by still images of the Edicule, Constantine-era marble and the holy bed itself.

The data gathered from the holiest site in the Christian faith has excited scientists and pilgrims alike. It is a joyous moment to see science confirm Christian traditions and shed new light on religious history. Watch the National Geographic special on December 3 and learn more about the moment that put Christ back at the center of the attention of both believers and non-believers alike. 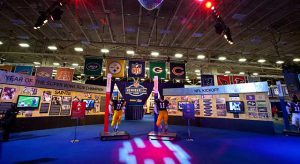