Sermons in 140 Characters or Less 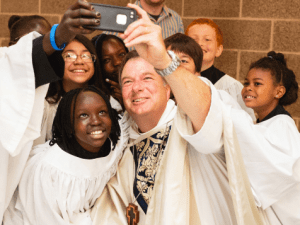 Faith and technology have been combining over the last decade, and Christian leaders are taking notice.

Bishop Christopher J. Coyne of Burlington, Vermont is active on social media, sharing his faith with his 13,000+ followers on Twitter alone. By 8 a.m. each day, his followers know the day’s saint, gospel reading, and latest news from the pope.

Bishop Coyne says using social media is as much a part of his ministry as visiting the sick. “It’s where we need to be,” he says. “It goes to the core of spreading the good news.”

With the religiously unaffiliated now making up 25 percent of the American population, pastors are looking for new and innovative way to reach the masses. Faced with declining membership and participation, priests, ministers and rabbis are now popping up on Youtube discussing tattoos, tweeting about the dangers of gossip, and posting podcasts on living your faith. Some are even checking Facebook analytics, trying to uncover if posting at 6 a.m. reaches more people than posting at 7 a.m.

Meredith Gould, author of “Social Media Gospel: Sharing the Good News in New Ways,” advises churches and clergy on developing a social-media strategy, and she sees a lot of wariness. “When it’s always been done one way, changing that is scary,” says Dr. Gould.

Often, clergymen feel they need to maintain proper distance from their congregations and fear too much of an online presence can alter that. Others are afraid it will take away from the importance of in-person Sunday worship. Almost all feel that they have no clue where to even begin.

But with the changing times and heavy focus on technology, many Christian leaders are realizing the necessity of making a presence online. It can help get their churches name out, allow them to participate in talk about public events, and create a positive image. For example, a priest can highlight their churches work in homeless shelters.

Social media can also deepen relationships. People constantly flip through social media, at the office or standing in line at the grocery store. A fellow church member may post about having to drop their mother off at the hospital. This gives other members and Christian leadership a chance to say “Hey I saw you posted this, I am praying for you” or similar.

“Connecting with members online allows you into their lives in a different way and be a part of the conversation about whatever is going on in their life,” says David Hansen, a 38-year-old fourth-generation Lutheran Minister from Texas.

Hansen makes sure to build time for social media in his calendar. Each Monday, he schedules a week’s worth of Facebook posts that reflect on the past Sundays sermon and looks ahead to the next. He also posts an invitation on Facebook for prayer requests regularly, which sparks conversation and engagement with the wider community. He has since helped his father, also a Lutheran minister, to set up a Facebook page.

The hardest thing, Bishop Coyne said, is the learning curve. He has a video-editing tool but hasn’t figured out how to use it. His knowledge has grown exponentially, however, learning that satire and irony doesn’t always work but videos perform phenomenally.

It has become commonplace for leaders to join the social media bandwagon, and they are beginning to learn how to get the Word out to the masses in a cool new way.  Bishop Greg Rickel of Washington blogs about gun violence and the Central American refugee crisis, and posts his sermons on his webpage, below a picture of him taking selfies with children. His goal, in part, is to reach those 35 and younger.

“We have to learn their language and the world they live in.” Rickel says.

read next post
Ouija: Real Danger or Film Fantasy?
archives most recent
More from Beliefnet and our partners
previous posts