Here are the 7 Things We Learned from the Friends Reunion

On February 21st, five out of the six cast members of the beloved hit TV show Friends met once again. The special, paying a tribute to director James Burrows, commemorated the 1,000th episode of TV that Burrows has directed. The special reunited the stars from his most famous shows – Will & Grace, Big Bang Theory, Cheers and of course, Friends.

Matthew Perry, who played Chandler Bing, couldn’t be present for the reunion but was able to introduce the cast via a video message.

Though critics claimed the reunion wasn’t what they hoped it would be, there were many tidbits to be learned about the Friends cast and it even left Jennifer Aniston shedding a tear.

Here are the top 7 facts we learned from the Friends reunion. 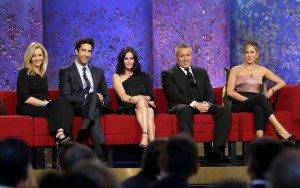