We Bid Farewell to Leonard Nimoy 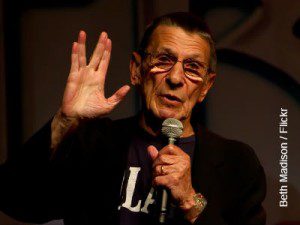 Friday, February 27th Leonard Nimoy, famously known for his role as Spock in the infamous Star Trek series, passed away at the age of 83. His wife, Susan Bay Nimoy, confirmed his death, stating that the cause was the end-stage chronic obstructive pulmonary disease.

Nimoy publicly announced last year that he was diagnosed with the disease – which is attributed with years and years of smoking but Nimoy had given up the habit 30 years prior.

Actor, film director, poet, photographer, singer and songwriter – Nimoy has done it all. Nimoy was born to Jewish migrant parents in Boston, Massachusetts. He began his career in his early twenties, teaching acting classes in Hollywood and producing minor film and television appearances through the 50s. He also played Narab, one of three Martian invaders in the 1952 movie serial Zombies of the Stratosphere. Then in 1953, he served in the United States Army.

Nimoy is survived by his wife, two children and six grandchildren. While he may be physically gone, his spirit will live long and prosper through his survivors and the wonderful works he has created.

Ben Roethlisberger Gives Thanks to God In His Retirement Announcement

Two-time Super Bowl champion Ben Roethlisberger has retired from the NFL after an 18-year career with the Pittsburgh Steelers. Roethlisberger announced his retirement on Twitter, saying, “The time has come to clean out my locker, hang up my cleats, and continue to be all I can be to my wife and children. I retire from football […]