World Cup Scores: All Tied Up 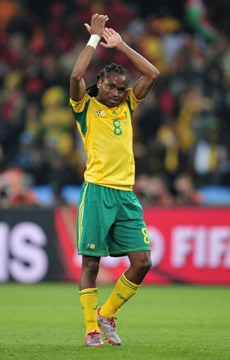 After all the hoopla, all the anticipation, the World Cup 2010 competition opens with… a 1-1 tie between Mexico and host country South Africa. Yes, folks, sports can end in a tie, a draw, Even Steven, and not just in your child’s Little League.

My reaction #1: There is something beautiful, dare I say spiritual, about a hard-fought sports match that can end in a tie. They prepared, they battled, they pushed it as hard and far as they could, and they end up equal, forced to be satisfied with this in-between state of neither winning nor losing, but accepting their utter and complete equality with their opponent. They’ve met the enemy, and the enemy is… exactly as worthy as they are.
My reaction #2: Huh. A 1-1 tie. No wonder competition-obsessed (and winning-obsessed) Americans hate soccer.
Photo: Clive Mason, Getty Images
read next post
My Meeting With Coach John Wooden
archives most recent
More from Beliefnet and our partners
previous posts