‘The Book of Eli’: Interview with Denzel Washington, Mila Kunis, and Gary Oldman 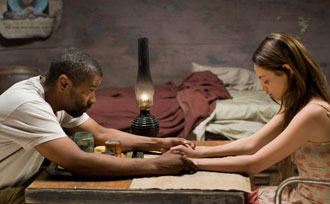 By Sara Shereen Bakhshian
In Warner Bros.’ “The Book of Eli,” sometime in the future a lone warrior Eli [Denzel Washington] is on a mission surrounding the presumed last remaining Bible. In the midst of his journey, Eli comes across a robber baron of sorts, named Carnegie (Gary Oldman) and his partner’s daughter, Solara (Mila Kunis), changing his life. Before the film’s Jan. 15 release, the cast members sat down for roundtable discussions with reporters of faith-based publications to discuss their characters, the film and spirituality.

Some answers are condensed for spatial purposes.
What is the thesis of the film?
Denzel Washington: Ultimately, the film to me is hopeful. [Despite all that happens, Solara] walks through those gates and carries the word on forward.
The film’s advertising focuses on one believing, and it is narrowed down to your character Eli. What is meant to be believed in?
Washington: My father was a minister for 50 years (with) Pentecostal Church of God in Christ. We prayed about everything, every day, then he always said, “Amen. God is love.” I thought God is love was one word. Like “Godislove.” And it took me a long time to learn what that really meant. If you don’t love your fellow man, women, person, then you don’t have anything. … If you don’t treat your neighbor as you would want to be treated that to me is the fundamental message.
The audience doesn’t get to know a lot about Eli’s past. How did he get skills like martial arts?
Washington: In [Eli’s] 30 years of walking, you run into people. I make light of it, but that’s almost the way I looked at it. … There’s this whole issue, without giving it away, is he blind, is he not. … If you look at the movie, sometimes I actually bumped into stuff — and they used it. But it was actually an accident or it was God’s will. In a couple of scenes, I bumped and tripped over stuff and they kept it in there. I’m sure there will be people [who say], “Oh, there’s the clue. … I told you he was [blind] because he bumped into that.” So maybe he can [see], maybe he can’t? Maybe he can see a little bit? Maybe his eyes are clouded? I don’t know.
So martial art skills don’t necessarily come with God’s calling?
Washington: It could be a gifting.
Mila, what drew you to the film in particular?
Mila Kunis: I was excited to work with Denzel Washington and Gary Oldman and the [directors, the Hughes] Brothers. I mean, it was a simple decision of mine there.

How did not knowing the world before play into Solara’s character development?
Kunis: I think our journey is dependent on the fact that she doesn’t know what the world has to offer. That’s [why] she’s willing to venture out full force not realizing the good, the bad and the ugly. But she’s willing to try.
What are Carnegie’s redeeming qualities?
Gary Oldman: I think along the way, he’s got sort of distracted and he may be contaminated a bit from the water. He wants to put some kind of order together amongst all this chaos. And I think it’s a miraculous thing that he’s done. If you think about all the things that one just takes for granted that are just so readily there, like heating, cooling, refrigeration, food, water, all of those things. And then suddenly all of that was taken away. For this guy to have even [gotten] this far and put this community together is an incredible thing in the circumstances.
Kunis: He had good intentions, it’s just the way he went about them was a little askew. He’s not a bad guy.
Oldman: Maybe it’s Eli’s faith I think ultimately that he’s kind of – that’s something that’s immovable. And I talked a little bit about this with [director] Allen [Hughes] and I think [Carnegie] probably envies it. You can sense it, you sense it in people.

Kunis: I thought [Carnegie] was the most mysterious character because at first I thought he wanted the Bible in kind of a satanic kind of, “I hate this book.” But he kind of revered it, but in an odd kind of way.
Oldman: But I think he believes. I think he’s there but believing that he can bring order to this community. I mean, he’s been very clever [with the community].
So, it’s kind of a benevolent meets pragmatism that drives him?
Oldman: Initially, I think yeah. But when you are the guy with the [power] – I mean, the currency is this fresh water. It’s like anyone. I think the power’s got to him.
Did Solara feel a hopelessness or did she just not know any better because of her situation?
Kunis: I think she’s naïve due to the circumstances, but I don’t think she was hopeless. I think her whole purpose of when she met Eli was that he gave her hope. And he gave her a reason to want to explore and see what all the world has to offer, good or bad. So, I think he inspired her to live.
*Photo by Warner Bros/David Lee
read next post
Watch Trailer: 'No Greater Love'
archives most recent
More from Beliefnet and our partners
previous posts