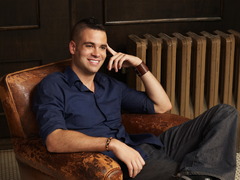 [image from FanPop.com]
When I was growing up, there weren’t a lot of Jewish characters on television. Usually, around Christmas-time, some TV character would note that they celebrate Hanukkah instead of Christmas, but for the most part, Jewish identity didn’t play an active role in that character’s onscreen life. If there were Jewish characters, they played accountants, nebbishes, nerds, and there was a definite corollary between being smart, and being undesirable.

Last night’s “Glee” seemed like another one for the books. Rachel – herself an outcast for being in glee club (and for being remarkably convinced of her own greatness) – is hounded by her regular stalker Jacob Ben-Israel (played by Josh Sussman), the creepy, nerdy blogger kid with the Jewfro (who also seems remarkably self-possessed from within his bespectacled nerdness – maybe that’s the power of having a blog). He utters a well-crafted, funny, creepy line to the woman he desires: “The independent polling company in my Dockers has determined that you’re the hottest girl in this school,” notes the nerd/blogger/cliché; then he follows up by referring to a piece on his blog about Rachel’s “rumored lust for Jewfros.”
The minority students don’t feel they’re being represented, the cheerleaders report to sinister (and hilarious) coach Sue Sylvester (the amazing Jane Lynch). So Sue isolates some of the minority students to be on her team (“Santana! Wheels! Gay kid! Asian! Other Asian! Aretha! And Shaft!”). Quinn delivers a Sue-scripted line to Brittany and Puck – “I think Sue is right, by the way – he clearly doesn’t like minorities” – and the next scene sees those two students with Sue, who clarifies – “So your last name is Puckerman?” she asks. “Shalom,” the mohawked, MILF-loving, somewhat dense football player/father-to-be says, raising his fist in Semitic solidarity. “Who knew?” Sue shrugs.
Puck is short for Puckerman? Who knew, indeed…

So, to sum up, on one end of the spectrum, we’ve got smart, but nerdy, unappealing and creepy; on the other end, we’ve got someone who’s hot and rocks musically, but who is also an irresponsible, chauvinistic, unlikable meathead. Not to judge a character by his or her name, but perhaps lurking in the Jewish character wings is Artie Abrams (you know him as “the kid in the wheelchair”), who has yet to have a real storyline. Or maybe we’ll learn more about Tina Cohen-Chang‘s background. In any case, one gets a sense that perhaps there are more Jewish tales to be told Gleefully – maybe even before we get to the next “December Dilemma.” And if I may plead with Ryan Murphy and the other producers, when it’s time for the Jewish musical number, please don’t pick “Hava Nagila” or something from “Fiddler on the Roof.” And if you need me to be a Jewish musical consultant, just call.
Did you miss the episode? See it for yourself on Hulu.

read next post
Horror Movies Not Halal?
archives most recent
More from Beliefnet and our partners
previous posts