Derek Webb: ‘I Can No Longer Make Apologies’ for How Christians Behave 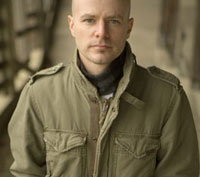 It’s not exactly Dylan going electric, but when Christian singer/songwriter Derek Webb turned techno on his latest album “Stockholm Syndrome,” it was reason enough to pay attention.
That’s not why “Stockholm Syndrome” is making headlines, however. After hearing the album, Webb’s record label, INO, refused to release one of the songs on the album, a scathing critique of how evangelicals approach homosexuality. “I had been working under what was a delusion,” Webb told me in an interview, “that although technically you could call me a “Christian artist,” it’s got nothing to do with how I make art, where I live, what I do.” Read on for more on why Webb wrote the song and why the label’s move shocked him.

When INO, your record company, decided they would not release the song “What Matters More,” was that an amicable decision, or was there controversy?
Yeah, there was. It was a surprise because I’ve put all of my solo records out with INO and there have been some challenging things on those records, and they’ve always been really supportive. I knew I was asking for trouble with that song. I understood that we had gotten into subject matter that was really tricky for INO’s system of distribution. But I guess I’d gotten so much other stuff in that I wasn’t really expecting it would be that big a deal. I had been working under what was a delusion that, although technically you could call me a “Christian artist,” it’s got nothing to do with how I make art, where I live, what I do. INO had done well to create an atmosphere where I felt like I could completely trust my instincts. So to suddenly hit a brick wall was jarring for me.
“Stockholm Syndrome,” which has an electronic sound, represents a pretty big jump from your past albums, on which you were a guy with an acoustic guitar. What’s behind that and how did Josh Moore figure into it?

My goal is not to be bored. Singer/songwriter music just bores me to tears, especially my own. And there are so many exciting possibilities in computer-based music. Literally any sound is available at any moment. I mean, if the Beatles were making their experimental suite of records today, they wouldn’t be doing things multiple-mono and in reverse and cutting the tape up. They would be using loops. It would sound like hip-hop. So, rather than emulate what my heroes were doing with limited tools, why not imagine what they might be doing with more modern tools? But I had no idea how to get there, and Josh has been at the center of this really vibrant and budding hip-hop community that’s happening in Houston–writing sequencing, engineering, producing. So we started to create sounds and send things back and forth.
Let me ask a little more about “What Matters More.” How would you like to see Christians change their ways?
I am not in the business of changing people’s behaviors. I just hope they listen to the song. What they do with it is kind of somebody else’s business. But here’s the reason I wrote the song–I have gotten to the point where I can’t go a lot further in several relationships in my life, specifically with several of my best friends who are gay or lesbian. I am having a hard time with them knowing the community that I am a part of, with all of us looking at this completely counterintuitive hatred coming out of my community. It was important to me to basically say to my friends, “Whatever you see under the category of Christian culture that we both agree is completely inconsistent with the person of Jesus, I want to draw a line and I want to get on the other side of it.” Because I can no longer make apologies for some of this stuff.
Many young Christians especially are comfortable saying, “We’ve got to stop from harping on homosexuality.” But that’s different from saying you don’t consider homosexuality to be sinful. When you ask in that song, essentially,, “When did Christianity become all about being straight?,” do you want to say that homosexuality doesn’t alienate you from God?
That’s a big question, and I’m not backing off. But I have not on this record addressed the particular morality of a lot of these issues. That has been so well covered by the church, unfortunately with no other connection–people have heard a lot of the church’s theology and not seen a lot of the church’s ethics. There’s a real disconnect there, and that bothers me. But I don’t think it’s a conversation that is had well in this medium. This isn’t an ideal medium to speak about such a personal and nuanced issue. There’s a huge discussion to be had, and I want to have that conversation. I hope to have it a lot on the road with people, but not if it’s a roomful of people with a camera on me. Because so much can happen between that intimate moment and the moment where anyone could hear that. What I can say is, I’m not trying to create some kind of a moral loophole for anybody. It’s not that anybody is less wrong as much as we’re all more wrong. Your question was, Do I think that homosexuality alienates you from God. Thankfully, not anymore than habitual heterosexual sin does.
People can and do disagree about that particular issue. The thing we can agree on is how poorly we are loving the people around us who live or believe differently than we do. Those are the people we are called to engage with and love and care for. Before you even try to love your enemies, how about knowing your enemies? How about knowing the people you consider to be your enemy? Because you might find that they’re not really your enemies. You’re your enemy, and you are just like your enemies. There is no difference. We all need exactly the same thing. So, that’s more where, you know, I hope some of this lands.
read next post

Madonna the Journalist?
archives most recent
More from Beliefnet and our partners
previous posts