Colbert from Iraq: More Relevant Than We Expected? 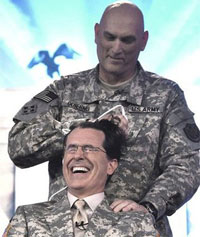 Every time I travel to Los Angeles I love picking up my beloved L.A. Times. When I can’t, I read it online. A recent story on Stephen Colbert caught my attention.
What do you think Stephen Colbert would have to say from Iraq on his “The Colbert Report?” Drumming up reminiscences of Bob Hope and borrowing from Bernard Shaw, Wolf Blitzer, and Dan Rather, Colbert donned army fatigues and was playing the role of a serious reporter while doing his satirically-driven entertainment show.
“What an honor it is for you to have me here,” said Colbert in his typical, obvious and blatant approach to ironic comedy. “Iraq is a country so nice we invaded it twice,” he continued. And the show was on.
All too often, those who we remember as heroes or legends once broke from the mold of typicality and stepped out on their own. What if Stephen Colbert is more than entertainer? What if he is that guy?

At a time when more and more people have lost interest in Iraq and are thinking about Afghanistan (or more relevantly to most, the economy), the one person who has brought a greater sense of reality to the current political (juggernautical?) trends may not be Mr. O’Reilly, or Mr. Hannity, or Mr. Blitzer, or Mr. Dobbs, or Ms. Winfrey, or Mr. Olberman. It’s Mr. Colbert. Those who are most ready to move and change and follow the correct-est though are listening to Mr. Colbert.
The rest sure feels like a parlor game, which is great if you like games, but not if you’re a person of faith who truly wants to make a difference, or who truly believed the last campaign and truly wants change! 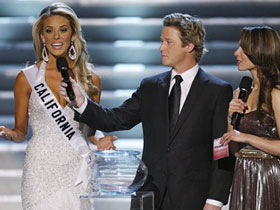