Hulk Hogan Leans on His Faith 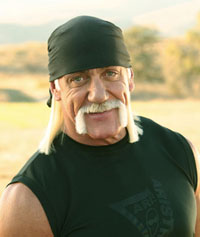 Wrestler and reality TV star Hulk Hugan has been in the news a lot the last couple of days for a quote he recently gave Rolling Stone magazine during an interview about his pending divorce from wife Linda.
The quote: “I could have turned everything into a crime scene like O.J., cutting everybody’s throat…I totally understand O.J.. I get it,” Hogan says, was taken out of context.
In a video interview with TMZ (from his car) Hogan said that Rolling Stone leaked only part of the quote in order to “sell magazines.” He also said he is relying on his faith during these tough times.

[I’ve] leaned on my religion. I was saved when I was 14. I accepted Christ as my savior. He died on the cross and paid for my sins….I found some very good friends–Michael Beckwith with the Agape Church told me about being positive and the power of positive thinking. I could have went the wrong way. I could have self-destructed, but I took the high road. [Rolling Stone] took half a sentence to sell magazines.

There’s no denying that the media often sensationalizes events and takes quotes out of context to get viewers or readers or page views, but what do you think of Hogan’s response? Do you think he’s genuine? Or should he have never even mentioned the name O.J.?
***By the way, RollingStone.com is no longer featuring all of the print magazine’s full-length articles. I haven’t picked up the new edition yet (it hit newstands today) so I have not seen the actual quote. If you have a copy, post the full O.J. quote from the interview below so we can discuss.