The Intrigue of William Lobdell’s ‘Losing My Religion’ 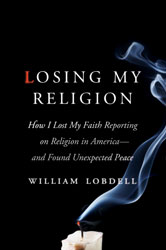 By Chris Sagona
I felt instant foreboding when I ripped open an orange Fed Ex package two weeks ago and saw that the next book I was being asked to review was called “Losing My Religion.”

It wasn’t just the title and the cover’s obviously extinguished candle that gave me a queasy feeling. It was the author’s name; William Lobdell. He’s a former L.A. Times Reporter known for finding great stories, avoiding assumptions– and just telling things as they are. He’s the enthusiastic guy who convinced the L.A. Times to let him write a column called “Getting Religion,” while still working for the community news division, then was plucked from the local section to become the LA. Times full-time religion reporter.
I put off reading his book, fearing the inevitable; that he’d convince me to lose my religion, knowing all the while that it is a ridiculous fear. Now that I’ve read it, I have to confess: I’ve been thinking about his book for days. The non-stop kind of mulling that has you watching TV but not seeing a thing, and missing your exit sign on the highway.
In the weeks after the L.A. Times published Mr. Lobdell’s last article, a front page opinion piece explaining how he’d lost his religion, he received about 2,700 emailed comments.
I feel I have about that many questions, thoughts, frustrations that I’d like to tell him too. No, no, I mean that I’d want to shout at him, laugh with him about, congratulate him for, and then cry about. It’s that kind of book. Depending on your background, you could end up trying to convert him, or congratulating him on seeing the light of disbelief. It felt less like reading a book and more like looking around the back of your closet and everyone else’s closet with a flashlight.
Oh, the things you can find back there.
I’ll take my confession one step further; he made a dent in my faith.
I found myself trying to summon forth my faith by focusing on a misstep in his journey. If you follow Mr. Lobdell every step of the way, yes, he’ll lead you on a nail-biting journey that has as its logical conclusion that religion’s a bunch of hooey that can give religious leaders a job, sometimes fortune, and sadly, great opportunity to take advantage of people. He very effectively shows that religious organizations and even their unwitting members reject religious corruption stories, as simply mean attacks, as if there’s no good in shedding light on crime.

The misstep in our procession through religion with him is this: in November 2000, Jean Pasco, an L.A. Times reporter, “one of the most respected reporters in the news room,” says to Mr. Lobdell: “You ever hear of Father Michael Harris?”
He shakes his head.
So she tells him that Harris was principal at Mater Dei and Santa Margarita high schools in California and raised about $26 million to build Santa Margarita. And she tells him he was being named in a clergy sexual abuse lawsuit– and she has all the documents that have been leaked to her. No one else had them.
Now here he is, one of the top religion reporters in the country, at a major league newspaper, and he has been handed an incredible story, aching to be told, before it’s hit anyone else– and he ignores it.
He leaves her stack of papers on his desk, unread–for months.
The L.A.Times delved into the story when alerted that there’d just been a $5.2 million settlement and a press conference was about to take place.
He tells the reader about it, of course, to be honest.
He’s stating he’s flawed, as we all are. If during those crucial months of his reporting career and personal life, he’d read the court documents recounting the abuse, perhaps he wouldn’t have stepped innocently into Catholic Conversion classes, poised for a big fall off a big cliff. For it’s the experience of being one week away from Catholic conversion while uncovering the Catholic sex abuse scandal that has Mr. Lobdell’s head spinning, confused that if God is indeed leading spiritual leaders, and if some of the clergy who were adamantly protected by the church, were raping young children, then what does it say about God? It’s in finding out about support groups for women whose children were born by priests -and in witnessing a court case in which a priest holds himself to be untouchable by child support laws because of his vow of poverty–that Lobdell realizes that writing religion stories has become just too heart wrenching for him. He’s burned out and frustrated that instead of welcoming the disclosures, church members and some members of the public seem to protect the aggressors and hold disdain for the victims. His conclusion about God is that either he doesn’t exist, or worse, he is indeed leading these church members.

The interesting, irresistible nature of it though, is that Mr. Lobdell doesn’t cling to his new atheism.
He really isn’t sure at this point if there’s a God, and if so, what he’s like–or if most of the world is just being fooled by religion. His loose grip adds to the intrigue of “Losing My Religion.” It’s like a Rorschach test, with inkblots that everyone reads into in a different way.
The book’s been out for three weeks and is in its third printing. If you read the book, I promise you that you’ll end up wanting to email Mr. Lobdell with your admiration, or disdain, or personal experience, or frustration….or….or…
Chris Sagona has covered religion, crime and foreign news as reporter, managing editor, associate producer and foreign news editor for Fox News Channel, News12/CNN affiliate and Community Life, and has been published in The Herald News and The Record. She’s won Press Awards from the Society of Professional Journalists and the Press Association for Best Feature Writing, Best Deadline Reporting, Best Breaking News Reporting and Excellence in Journalism for Distinguished Public Service.
read next post 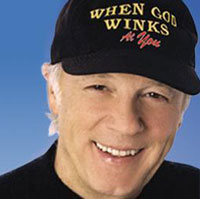