Harry Connick Jr. Talks to Idol Chatter About Faith and ‘New in Town’ 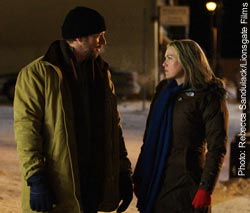 After seeing “New In Town,” the romantic comedy starring Harry Connick Jr. and Renée Zellweger that releases nationwide on January 30th, I was lucky enough to do a Q&A with the handsome crooner, himself, over the phone (his accent is pretty wonderful, I gotta say). After some introductions and congrats about the new movie, Connick talked at length about faith, God, New Orleans, music, and of course, working with Renée.

In “New in Town,” your character (Ted Mitchell) has deep roots with a close-knit Minnesota town in need of saving. Did your well-known work trying to help your own home town of New Orleans back to life play a role in your decision to get involved with the film?
To tell you the truth, the only thing that made me want to do the film was Renée. When I heard that there was a movie with Renee Zellweger and they wanted me to play the guy [lead role] I was excited. I loved the script and all, but mainly I was excited to work with her. Every movie she does turns out wonderful and that made me want to be a part of this one.
How much of Ted’s life is parallel to your own?
Well, I didn’t draw on a lot of personal experience for this film. To me, it’s more fun to create a role out of nothing. So any subtext for Ted is not also subtext from my own life, though I can see how someone might draw parallels.
What was your favorite part of making “New In Town“?
It’s difficult to cite one specific moment because the whole film was a joy to make. The entire cast and crew was so lighthearted. Although the movie is set against the sad reality of a plant going out of business, it was still a romantic comedy and so we had a lot of fun on the set. It’s a great cast and we had a great time together.
How do you balance a career in acting, a career in music, and family?
My family is the centerpiece around which everything revolves for me, so I don’t really have to balance my family into everything. I record sometimes, do movies sometimes, but I always come back home. I remember when my second daughter was born, I had an offer for a movie I was excited about doing, and for an instant I considered committing to the project which would have required me to miss the birth. But then my wife and I decided that was crazy. So fortunately, I’ve had great people around me as well, to help make the important decisions.
Faith has a very important, though subtle role, in “New In Town.” Can you talk a little about that?
I think Ted is somebody who is a little bit down on his faith. He had been beaten up pretty bad with his wife’s death, and was in a bit of a Job situation for a while. There was probably a period of his life when he was questioning his faith, but he kept on going, doing what he needed to do, taking care of his daughter, and it worked out for him. I think what got him through it all was that he had a support system of people around him after his wife’s death. His community is important to him and it’s a Christian community.

What about faith in your own life: are there different sides of your spiritual life fulfilled by music and by acting?
My spiritual life is just that: spiritual. There are times when I think there is some kind of divine intervention. Sometimes you are left speechless by an experience you have with your life or your art and you thank God for that and you say to yourself, that was a blessing. But the spiritual part of my life is bigger than anything that I am and bigger than my art. I think God is bigger than art and me and all of us, beyond all of us. I can’t even put my art in the same sentence as God. I know that the gifts I’ve received are from God, but I don’t try to dwell on a link between my art and my faith and my spirituality. I just try to be the art and try to do what I am supposed to do down here. I try to be guided by what I think is right. When I pray, I don’t really pray for anything, I just try to do God’s will and do it the best that I can. I think that’s what God would want me to do. So I don’t necessarily draw lines between artistic choice and spirituality.
Can you talk a little bit about your home town New Orleans, and the work you’ve done there post-Katrina?

I think it’s coming along. Three years ago Branford Marsalis and I started a place called Musician’s Village with Habitat for Humanity. It’s a big housing development for New Orleans musicians and we’re constructing a school for musicians down there, too, so I’m heavily involved in that. In general, I hope the enthusiasm people have shown since the storm keeps going. That enthusiasm is so important–it proves the city can come back and I have great faith in people bring New Orleans back to life, back to what it once was.

read next post
Watch Trailer: 'Blessed Is the Match'
archives most recent
More from Beliefnet and our partners
previous posts