To say that the final season of “Battlestar Galactica” began with a bang is an understatement: the crew discovers that residual radiation from a nuclear holocaust makes Earth uninhabitable; despondent, Dee shoots herself; and Ellen Tigh is revealed to be the fifth of the “Final Five” Cylons. But, it also started out with a whimper, literally, more quite moments of despair and confusion: President Roslin is confronted by the seeming failure of the prophecy she’s so adamantly clung to, and Starbuck quietly disposes of the original of which she is, we are led to assume, a copy.

I have to say that I thank the Lords of Kobol for the promising start to the final episodes as I found last season to be mainly repetitions on the theme of Starbuck giving her best Jack Nicholson in “The Shining” impersonation: paranoid and petulant. “Battlestar Galactica” boldy goes where not many other shows have gone before in this post-9/11 era, exploring the concepts of jihad, fundamentalism, transmigration of the soul, and matters of morality when questions of survival are not just academic. In fact, it garnered a Peabody Award for its boldness and I’m glad to see it back in form.
In a recent conference call Ronald D. Moore, co-creator and executive producer of the re-imagined series, wouldn’t reveal too much about coming events but promised that Friday night’s show will be a smaller, character piece, that the nuclear holocaust on earth and destruction on Kobol are somehow related, and would neither confirm nor deny that Starbuck was a secret thirteenth Cylon.

Personally, I’m curious as to whether it’s the humans–or, rather, the characters we believe to be “human,” as the show keeps providing new reasons to wonder about the reality of the human/Cylon distinction–will be coming in to some new self-awareness. If the Final Five are among humans now, and somehow always have been as the flash backs lead us to believe, then what does it mean to be human?

And what, if any, is the significance of the fact that most, if not all, of the constructive, progressive characters — distinguished from the “preservationist” or “revanchist” characters like the Adamas and Tigh — are women? Or do the producers and writers simply excel at creating strong female characters — the prophetic President, the witnessing Six, audience fav and biggest stumbling-block to other characters Starbuck, and final Cylon Ellen Tigh — to act as foils to their fallible male counterparts: male authority figures like the Cylon “priest” Cavil, Admiral Adama, Apollo, Baltar and even the doctor who can’t save Roslin?
Moore promises that the mythologies will be addressed fully in these final episodes and I, for one, can’t frackin’ wait. Besides there will be plenty to debate–religious terrorism, artificial intelligence, corporate responsibility–in “Caprica,” a prequel series set to premiere in 2010.
“Battlestar Galactica” airs Friday nights on the SciFi Channel at 10 p.m. ET.
read next post 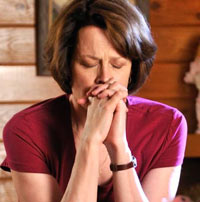