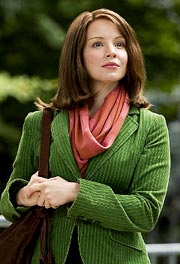 Before “Loving Leah” even Sunday night in California, the east coast calls began. The first call came from my parents. “I hope you’re watching this,” they said. I had plans, I told them, and wouldn’t be home for it. Then my friend Suzy called in. “Are you watching this? You need to watch this because I need you to tell me if all this crazy stuff is true.”
“This crazy stuff” is the film’s basic premise: a young Hasidic widow becomes part of a Levirate marriage, an obscure, rarely-if-at-all observed Jewish ruling in which she marries her late husband’s unmarried brother in order to provide the deceased with an heir post-mortem– I explained what I knew: that the ritual itself was real and not invented, and yes, the deceased’s brother can really exempt himself from it by spitting into a shoe. But I had to admit that I had no idea if anyone really did that nowadays, or whether it was being presented accurately and respectfully in the show.

Then the reports started coming in via Facebook: “Pretty cringeworthy,” one person said. “Painful more than just awful,” another said. Other comments ran in a similar vein until there was one quasi-endorsement: “I actually thought Lauren Ambrose was pretty aidel,” she said, using a Yiddish term that (if online Webster’s is to be believed) means “cultured or finicky.” “They should have called it ‘Reforming Leah,'” one friend commented, which along with a photograph of Lauren Ambrose baring her shoulders and smiling, leads me to believe that the character gives up her Hasidic lifestyle after finding love with the dreamy Adam Kaufman (who broke Buffy’s heart as “Parker,” the first mortal love to disappoint her).
So yes, I missed the airing, and am now looking for it online to form my own opinion. But was there anyone out there who really liked it? And does anyone really engage in Levirate marriage anymore?