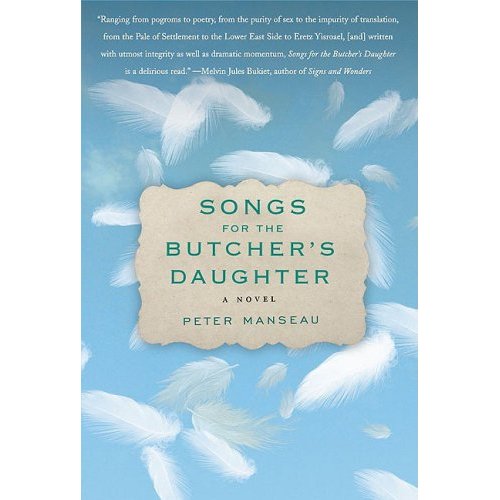 (Note from Beliefnet editor Patton Dodd: Peter Manseau‘s Songs for the Butcher’s Daughter kept me up for hours the night that I began it. I know Manseau to be a gifted, even gripping writer–his memoir, Vows, is a gorgeous page-turner–but I also knew that Songs had something to do with “the last Yiddish poet in America.” Given my passing [at best] interest in things Yiddish, I figured I’d peek into the novel and put it aside. But I couldn’t put it down.

Manseau can do a better job than I of describing what makes his story, and his position as a writer, so compelling. He kindly accepted my invitation to do just that.)

When I talk to readers about my novel Songs for the Butcher’s Daughter, I often lead with a joke that goes something like this: My last book, a memoir called Vows, was about how my father the Catholic priest met my mother the Catholic nun, so it was inevitable that my next book would be about Yiddish.

Songs tells the story of a man who believes he is the last Yiddish poet in America, a 90-something Russian-Jewish immigrant who has lived to see the language of his raising nearly disappear. The idea that my background led natrually to his story usually gets a laugh because, on the face of it, I am the least likely person to write a novel in which the life and death of a Jewish language plays such a crucial role.

Coming from Irish and French stock, raised in a thoroughly Catholic environment, I have no cultural, ethnic, or religious connection to Judaism. And yet to me it truly was inevitable — Jews might say it was “bashert,” destiny — that I would write about Yiddish, for what I have learned from this nearly lost language has shaped me as a writer at least as much as what I learned from the faith in which I was raised.

When my parents met in the late 1960s — my father a radical inner city “street priest,” my mother a teaching sister in a parochial school nearby — it was a time of tremendous change in the world and in their faith. They fell in love knowing that being together was against the teachings they had been raised with, but they chose to marry anyway. They didn’t have an easy time of it. Despite their one transgression, they wanted nothing more than to raise a good Catholic family, and yet who they had been before they married complicated their relationship with the church. In a sense, they were outsiders and insiders at the same time. As a result, so were their children.

I was vaguely aware of this through the years of my childhood, but I truly came to understand what they had been through only when I became an adult myself and came across — by accident, fate, or perhaps this too was “bashert” — novels, poems and stories written by people facing similar circumstances. Through a job as a collector of Jewish books I discovered Yiddish literature, which begins (more or less) with the 19th century fabulist Sholem Aleichem, who wrote the stories that would later become Fiddler on the Roof, and ends (more or less) with Isaac Bashevis Singer, who won the Nobel Prize for Literature in 1978. As foreign as stories of shtetls, pogroms, and immigration should have been to me, I was amazed by how familiar much of it seemed. The men and women who made this literature had been given a thorough religious education — just as I had — and then struggled to find their place in it, often pushing against their religious tradition until they discovered they could never truly leave it behind — just as I was beginning to do.

As the son of former Catholic clergy who had found his own unlikely fellow travelers in the pages of Yiddish literature, I decided I wanted to write a book that would explore questions of religious identity and loyalty: What does it mean to be (or not to be) a member of a particular faith? Is it merely belief, or is there something more to it? Can one learn another religion as one learns another language, or are such things more fixed than that, despite the modern, pluralistic assumption that, spiritually at least, one can “be” whatever one wants. In other words, I was wondering about the extent to which people can be “translated” from one religious language to another.

During my time as a Yiddish book collector I met many older men and women who were very much like my protagonist, Itsik Malpesh. They were elderly, their prime years well behind them, and yet they carried within them histories of great adventure and accomplishment, love and suffering. I wanted to explore what it might be like to look back over a long, tumultuous life from a position of relative calm. I learned a great deal from those older folks whose books I collected; I wanted to write a book that spoke to the lives they knew. Also, through the character of a translator, I wanted to examine my own fascination with those lives, and to ask the occasionally uncomfortable question: In asking to hear their stories, was I trying somehow to make them my own? As an outsider hoping to tell insider’s stories, I realized I should not ignore this question, but make it part of the story I would tell.

Since the book came out this fall, I’ve had the privelege of making a tour of Jewish community centers around the country, from New York to Texas to Michigan to Florida and beyond. Before each event I’ve wondered what my audience would make of me: Who is this son of a priest and nun who learned Yiddish in order to tell a very Jewish story? Who is he to tell our story? What does he want from us?

While I have encountered that kind of curiosity, and I’m always happy to explain myself, just as often I’ve heard a compliment that puts all such questions of identity and motive in context: If Shakespeare can write about Othello “the Moor of Venice,” why shouldn’t a guy with a goyish name like Peter Manseau write about a character called Itsik Malpesh? After all, if there’s one thing Jews and Christians have in common (along with Muslims, Hindus, Buddhists, etc) it’s the understanding that, no matter the source, stories can change lives.