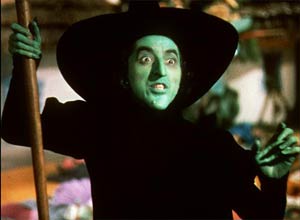 1. The Witch of Endor. Star Wars fans are scratching their heads at this one, trying to figure out how witches and Ewoks are related. But the Witch of Endor (or rather, “Ein-Dor”) figures prominently in the book of Samuel. After Samuel’s death, King Saul banished all practitioners of magic, but when he received no responses from God or the priests, Saul sought out the witch for advice about how to handle problems with the Philistines. The witch called up the ghost of Samuel, who provided no advice, but predicted the king’s death. So much for reassurance from the occult.

2. The Three Weird Sisters, from “Macbeth.” “Double, double, toil and trouble…fire burn, and cauldron bubble.” I memorized this scene in high school, and I still remember it. The “weird sisters,” as these witches are known, were the voice of prophecy, and they shared with Macbeth the prophecies that guide his actions and understanding of events.

3. The Wicked Witch of the West/Elphaba. In the 1939 “Wizard of Oz” film starring Judy Garland, “witch” actress Margaret Hamilton was apparently so scary in her role that she couldn’t go back to her teaching job after the production wrapped. “I’ll get you, my pretty, and your little dog too,” followed by an evil cackle that could raise hell, was too petrifying to young ears. Later, with the book and the musical “Wicked,” the Green Witch got a name (Elphaba), an extensive songbook, and a backstory that enabled us to understand why she became a wicked legend.

4. Dorrie, the Little Witch. A series of children’s books by Patricia Coombs featured a little witch who was always getting into trouble. When the first book appeared in 1962, Coombs established Dorrie as a kid who was entirely normal and flawed, despite being a witch. Dorrie has proven to be an enduring character; the most recent book was written in 1992.

5. Jennifer, from the book “Jennifer, Hecate, Macbeth, William McKinley, and Me, Elizabeth.” Aside from being the first name in the longest-titled book I ever had on my shelf as a kid, Jennifer is the antidote to Elizabeth’s alienation in school. Plus, she’s a witch. Published in 1984, I was as obsessed with Jennifer and Elizabeth as the apprentice witch, as I was with learning who Hecate, Macbeth, and William McKinley were. Long title, but E.L. Konigsberg, author of my other favorite long-named children’s book (“From the Mixed Up Files of Mrs. Basil E. Frankweiler”), is probably used to it.

6. Samantha, from “Bewitched.” Not Nicole Kidman in the treacly, annoying movie remake, but Elizabeth Montgomery in the original TV series (1964-1972). Whether her husband was played by Dick York or Dick Sargent, it didn’t matter. Elizabeth Montgomery, with her quick wit and even quicker, perky little nose–plus guest stars like Agnes Moorehead and Paul Lynde– elevated the show from kitsch to genuine comedy. For added unintentional humor, check out the “special effects” on the DVD sets.

7. Willow and Tara, from the TV show “Buffy the Vampire Slayer.” Willow was always a Buffy fan favorite, due mostly to Allyson Hannigan’s geek-chic cuteness. When Tara arrived, she brought out something else in Willow. The arrival led to one of the first gay relationships openly examined in a regular series and to an intense power and energy that allowed Willow to really explore her identity, her power, and the ramifications of her power in all its aspects. (Note: The Willow and Tara episodes don’t seem to be online yet — look for Seasons 5 & 6 on DVD– but bide your time with this Season 2 Halloween episode where the gang becomes what their costumes are. Spooky.)

8. The Charmed Ones, from the TV show “Charmed.” They kicked a**, had great powers, and managed to solve their cases within an hour. And, for some reason, they continued said a**kicking even when their clothes seemed too restrictive (or revealing) even for (street)walking. My favorite Charmed one was always Shannen Doherty’s Prue…but when she left the show, Holly Marie Combs’s Piper became my favorite. She could stop time, she had a cute immortal boyfriend, and she was always the most sensibly dressed of the three. Tied for last place are Rose McGowan (Paige) and Alyssa Milano (Phoebe). The wardrobe department should be reprimanded for what they inflicted on those two actresses. Another reason to love these sisters? The hilarious Television Without Pity episode recaps, written by someone who loathed the show and took every chance to criticize it.

9. Hermione, from “Harry Potter” series. If there’s any character in Harry Potter I relate to it’s the bookworm-y, boy-frustrated Hermione. True, the half-Muggle may consider herself a wizard instead of a witch. Who knows? The only thing that never made sense to me was why she’d be interested in Ron over Harry. But that’s just me.

And, because this is a very 2.0 list, here’s a write-in vote for favorite witch from one of my Twitter pals:

10. Kitchen Witch. The kitchen witch, according to a site about Wiccan practice, “is a unique form of the Craft, which focuses more on honouring the mundane in life. This involves honouring the Goddess by taking care of hearth and home, from finding sacred meaning in daily household chores to blessing everyday cooking with love and magic.”

Who did I leave out? Who’s your favorite pop culture witch? Discuss it here…