Sam Phillips ‘Don’t Do Anything’ Is Really Something 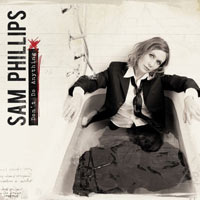 My love of Sam Phillips’s music is unabashedly deep and goes back many years. I have listened to her distinctive voice since I was a little girl, when she went by the name Leslie Phillips and was busy fighting the bubble-gum pop image contemporary Christian music tried to foist on her. Then, I followed her into her varied, eclectic musical career in the secular world where she became, at times, the female equivalent of Bruce Cockburn or an edgier version of Sixpence None The Richer’s Leigh Nash. And when she started writing music for “The Gilmore Girls,” well, that was the best treat of all.

Now, after teasing fans for over a year with various release dates for her first CD in four years -and the first one since her split with producer husband T-Bone Burnett—her new, self-produced “Don’t Do Anything” is finally in stores June 3rd. This underrated singer’s unique vocal stylings are at their finest here, and the musical arrangements are masterful, making this her best effort since “The Indescribable Wow.”
Restlessness, dissatisfaction, and longing permeate every song on “Don’t Do Anything”, which is not unusual for Phillips, but the dissonance this time is focused primarily in the direction of romantic love, and, one has to assume, the collapse of her marriage to Burnett. In fact, with the title song comes a sardonic lament of unappreciated devotion when she sings “I love you when you don’t do anything./ When you’re useless, I love you more.” On her single “My Little Plastic Life,” she refers to being free in a world “outside of your power” and on “My Career in Chemistry” she describes a toxic chemistry that she “still wears.” (Yeah, this is not exactly a CD you should be giving anyone on Valentine’s Day or playing on your anniversary).

The yearning finally turns heavenward, even if only in obtusely, on songs like “Sister Rosetta Goes Before Us,” in which she celebrates that in the midst of darkness she still hears music above her and on “Signals” she is searching for a sign “between heart and skin, between the shoulders where wings might have been.”
Yes, it is turns-of-phrase just like that which makes people like me gush over Philliips’s prowess as an artist of true distinction. And while part of me longs for Phillips to record something of a sequel to her album “The Turning”—a spiritual manifesto that changed and inspired the lives of so many Christians I know—I have to remind myself that Philips has grown up, just like the rest of us. She is now a mature woman who perhaps no longer wears her faith on her sleeve, who has perhaps more questions than answers, but still has the courage to encapsulate her emotions and experiences in her music in a way few artists ever do.
read next post
Watch Video: 'Sex and the City' Movie Featurette
archives most recent
More from Beliefnet and our partners
previous posts